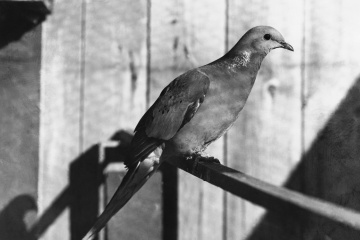 If Alfred Hitchcock's film "The Birds" hadn't been released 50 years after the extinction of passenger pigeons, viewers might have thought the film was about those birds that traveled in groups far more akin to swarms than gentle flocks. Passenger pigeons moved in packs of millions, filling the entire sky as they migrated. One flock often took two hours or more to pass, leaving behind a sea of pigeon droppings.

Passenger pigeons are estimated to have once made up 25 to 40 percent of the bird population of the United States [source: Smithsonian]. People put up with the noise and mess because the pigeons were also a tasty and plentiful source of food. To folks who had lived through the cold winters of the Northeast and Midwest, the arrival of millions of passenger pigeons heralded spring and good eating. In fact, the pigeons' delicious abundance — along with the railroad and the telegraph — spelled the beginning of the end for them.

As the railroad and telegraph expanded across the United States, hunters were able to easily follow the migration of pigeons. Industries cropped up along the railroad line for killing and packaging the birds for shipment. The passenger pigeon's sheer numbers, which had protected them in the past from predators, now doomed them. Hunters burned them out of their trees, ensnared them in nets, shot them and poisoned them.

Hunting, along with the destruction of their breeding grounds, led to the demise of passenger pigeons. By the 1890s there were only dozens of small flocks, rather than hundreds of flocks with thousands or millions of birds each. Martha, the last passenger pigeon, died in the Cincinnati Zoo in 1914 at age 29.

Just as the death of a canary signals a problem in a coalmine, the disappearance of such an abundant bird initiated the conservation movement in the United States. Although some saw the need for animal conservation earlier, the movement came too late to save passenger pigeons.

Today, passenger pigeons continue to represent conservation. 2014 marked the 100th anniversary of the bird's extinction. Groups used the date to commemorate the demise of the once-plentiful birds in the hopes of saving currently endangered species.

Once Thought Extinct, the Tasmanian Tiger May Still Be Prowling the Planet
Just What Was the Tully Monster? New Science Finally Explains the Enigma
The Dinosaur Egg: That’s What Came Before the Chicken