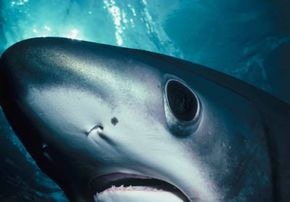 If you've seen the movie "Jaws," you can immediately hear the iconic theme song, with its eerie foretelling of what's to come. What's particularly unsettling about scenes with shark attacks is that we, the audience, know what's going to happen. We see the fins closing in on an unsuspecting swimmer and we hear that ominous music. The swimmers, however, have no idea.

When you go swimming or scuba diving in the ocean, your senses are limited. You can't keep your eyes open underwater for a long time, and you must rely on goggles to see what's around you. Your sight can be further complicated by dark and murky water. The only thing you can smell might be the salt of the sea, but you can't take a big breath in without water going straight up your nose. You may be able to hear splashing or nearby boats, but the main sound in your head is usually the thud of your own heartbeat.

Sharks are at a clear advantage here; they have advanced sensory systems that enable them to locate their prey, avoid their predators and find a mate. This is part of why movies like "Jaws" are so scary -- they can find us, but we can't find them. But when it comes down to it, sharks have sensory functions that are very similar to humans. They're just used to working underwater.

Does this seem hard to believe? When you think of a shark, is it hard to picture anything besides a giant mouth of sharp, scary teeth? If you look a little closer, you'll see nostrils just under the shark's snout, holes that lead to an advanced inner ear system and eyes that sometimes appear to glow in the dark. In this article, we'll take a look at how the senses of smell, hearing and sight work for sharks.

Go on to the next page to see if there's any truth to the story about sharks being able to smell a drop of blood from a mile away. 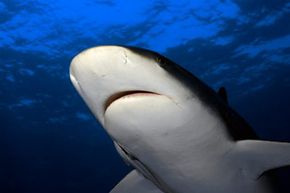 When it comes to sharks, the nose knows. Here you can see the two slits that are the shark's nares, or nasal cavities, located on the white underside.
Norbert Wu/Science Faction/Getty Images

Smell is probably the most important shark sense, so much so that sharks have been referred to as "swimming noses" [source: SeaWorld]. There are some impressive statistics to back this up, too. A shark can sniff out fish extracts that make up only one part for every 10 billion parts [source: Elasmodiver]. Other research shows sharks are able to respond to one part blood for every one million parts of water; this is like being able to smell one teaspoon of something in a swimming pool [source: Shark Trust]. What's more, sharks can smell these small amounts from hundreds of meters away [source: SeaWorld].

How does the shark do this? Just under the snout are two nares, or nasal cavities. Each nare has two openings, one for water to enter and one for water to exit. The shark sucks or pulls the water into the nares to sniff out any evidence of prey. The water goes into nasal sacs and over a series of skin folds known as olfactory lamellae. The nasal cavities are big spaces, which gives the shark more time to register the smells. The nasal sacs are filled with sensory cells, which send signals to the shark's brain. The olfactory lobes in the shark's brain analyze the smells, looking for those that match the scent of their prey or the pheromones of potential mates. And sharks have pretty advanced equipment up there -- about two-thirds of the shark's brain weight is composed of olfactory lobes [source: Shark Trust].

Once the shark identifies the scent and decides to pursue, it starts swimming. The shark's natural swimming motion of moving its head back and forth provides further assistance in determining where the scent is coming from. With each movement, the snout picks up more water for the shark to analyze, and the shark is able to tell whether it's coming from the right or left nare. This helps them determine which way to swim.

The shark's nose may work so well because it doesn't have to do anything else. Sharks use their noses just for smelling. Breathing is accomplished with a shark's gills, and the shark's sense of smell is not connected to its mouth in any way. Sharks often don't know how something is going to taste until they've taken a bite. This is how some people are able to "escape" from a shark attack -- the shark gets a little nibble of a foot and decides to reject the prey.

Can sharks hear as well as they smell? Find out on the next page. 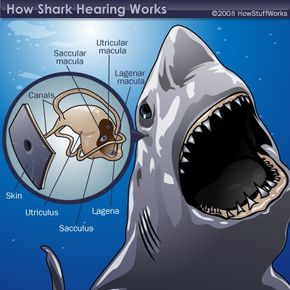 Diagram of a shark's ear
HowStuffWorks

Never seen a shark with ears? Well, sharks only have an inner ear. Two holes on either side of a shark's head might be the only clue you'd have to the presence of shark ears. Yet sound is often the shark's first tip-off that prey is nearby. The prey doesn't even have to be that close. Because sound travels farther and faster underwater, sharks are easily able to detect their prey from distances of more than 800 feet (243 meters) [source: SeaWorld]. That's more than two football fields.

The shark's ear is made up of three semicircular canals, which primarily provide the shark with balance. However, inside each canal are four sensory maculae, some of which are tasked with auditory function [source: Carrier]. The three sensory areas responsible for both balance and sound perception are called the sacculus, the lagena and the utriculus. These parts are lined with tiny hairs that help the shark detect vibrations in the water. The vibrations that the shark is trying to pick up include splashing and the sounds of an injured prey, which create different sound frequencies.

Sharks hear deep low-pitched sounds the best. According to the Shark Trust conservation organization, sharks hear sounds with frequencies ranging from 10 hertz to 800 hertz, and they are particularly responsive to sounds lower than 375 hertz. For comparison, 10 hertz is 1.5 octaves below the lowest note on a piano [source: PBS]. Humans, on the other hand, hear sounds ranging from 25 hertz to 16,000 hertz [source: Shark Trust]. Sharks can hear sounds much lower than we can, while we hear sounds much higher than sharks.

On the next page, we'll look into shark sight. 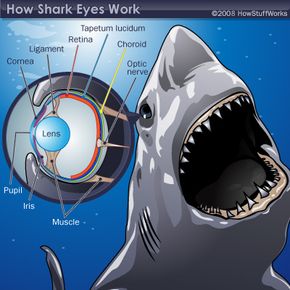 Get eye-to-eye with a shark.
HowStuffWorks

A shark's eyes are almost on completely different sides of its head, so the shark has a nearly 360-degree field of vision. The shark does have two major blind spots, which are right in front of the snout and right behind the head, and because sharks can only see about 50 feet (15 meters) ahead, the sense of sight is really only important to a shark once it has closed in on its prey [source: SeaWorld]. A shark's eye is similar to the eye of other vertebrates, with many parts that we'd recognize: a lens, a retina, an iris and a cornea.

One very important feature of shark sight is the tapetum lucidum, which is how sharks are able to see in the low light created by murky or deep waters­. The tapetum lucidum, located behind the retina, is made up of mirrored crystals. When light goes through the retina and hits the crystals, it's reflected back onto the retina. Cats have this same feature, and that's why both cat eyes and shark eyes appear to glow in the dark. In a shark, though, the tapetum lucidum is about two times as effective at reflecting light as it is in cats [source: SeaWorld]. Because of the tapetum lucidum, a shark can see about 10 times better than a human can in dim light [source: Shark Trust].

Inside the retina are rod cells, which recognize the difference between lightness and darkness. To control the amount of light they're exposed to, sharks dilate and contract their pupils. To focus, muscles surrounding the lens pull it closer or farther away from the retina. The retina also contains cone cells, which allow an organism to see color. For many decades, scientists thought that shark eyes had more rod cells, and that sharks couldn't see color, but it appears that more and more sharks have cone cells. Scientists are still determining how sharks interpret color.

Another unique thing about shark eyes is the eyelid. Sharks use their eyelids primarily as a protective measure. When it's feeding time, or when the shark has an encounter with another shark, it will close the eyelids to protect the eyes from abrasion. However, a shark's eyelids don't close all the way. Some sharks have a third lid known as a nictitating membrane, which will fully protect the eye. Sharks that don't have this feature, such as the great white and the whale shark, roll their entire eyes into the back of their head, giving them a white-eyed look.

To learn more about the world of sharks, explore the links on the next page.