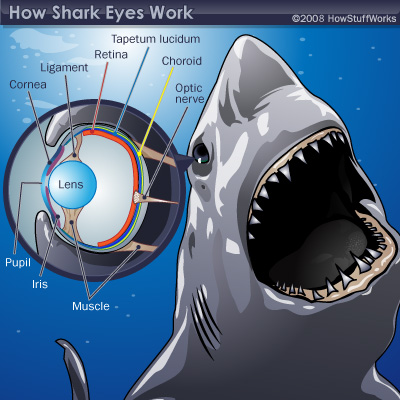 Get eye-to-eye with a shark.
HowStuffWorks

A shark's eyes are almost on completely different sides of its head, so the shark has a nearly 360-degree field of vision. The shark does have two major blind spots, which are right in front of the snout and right behind the head, and because sharks can only see about 50 feet (15 meters) ahead, the sense of sight is really only important to a shark once it has closed in on its prey [source: SeaWorld]. A shark's eye is similar to the eye of other vertebrates, with many parts that we'd recognize: a lens, a retina, an iris and a cornea.

One very important feature of shark sight is the tapetum lucidum, which is how sharks are able to see in the low light created by murky or deep waters­. The tapetum lucidum, located behind the retina, is made up of mirrored crystals. When light goes through the retina and hits the crystals, it's reflected back onto the retina. Cats have this same feature, and that's why both cat eyes and shark eyes appear to glow in the dark. In a shark, though, the tapetum lucidum is about two times as effective at reflecting light as it is in cats [source: SeaWorld]. Because of the tapetum lucidum, a shark can see about 10 times better than a human can in dim light [source: Shark Trust].

Inside the retina are rod cells, which recognize the difference between lightness and darkness. To control the amount of light they're exposed to, sharks dilate and contract their pupils. To focus, muscles surrounding the lens pull it closer or farther away from the retina. The retina also contains cone cells, which allow an organism to see color. For many decades, scientists thought that shark eyes had more rod cells, and that sharks couldn't see color, but it appears that more and more sharks have cone cells. Scientists are still determining how sharks interpret color.

Another unique thing about shark eyes is the eyelid. Sharks use their eyelids primarily as a protective measure. When it's feeding time, or when the shark has an encounter with another shark, it will close the eyelids to protect the eyes from abrasion. However, a shark's eyelids don't close all the way. Some sharks have a third lid known as a nictitating membrane, which will fully protect the eye. Sharks that don't have this feature, such as the great white and the whale shark, roll their entire eyes into the back of their head, giving them a white-eyed look.

To learn more about the world of sharks, explore the links below.