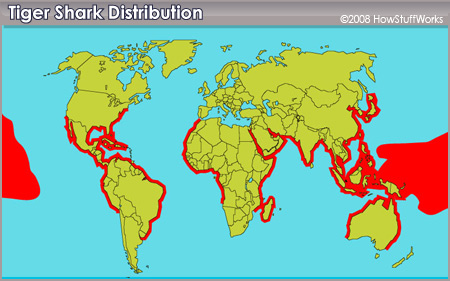 The tiger shark loves warm waters and is found in most tropical and temperate regions. Other than a ready supply of food, tiger sharks don't have a lot of other requirements for their abode. Tiger sharks are found both on the surface and in depths of up to 1,150 feet (350 meters) [source: Knickle] and they're found in lots of different waters, including river estuaries and harbors. Most often, though, this shark is found in murky waters in coastal areas. These areas yield a large number of things to eat, and as you might have picked up, the tiger shark likes to eat.

The tiger shark will travel a long way for a bite to eat; one study found that the tiger shark swam about 30 miles to 40 miles (48 km to 64 km) a day looking for food [source: Tennesen]. It also doesn't appear that tiger sharks have a pattern of particular feeding places. Rather, the sharks seem to visit sites on a somewhat irregular basis, returning to feeding sites anywhere from every two weeks to every 10 months [source: Tennesen].

It's sometimes hard for biologists to separate the tiger shark's love of food from other factors when it comes to location. For example, it's largely believed that tiger sharks migrate to warmer locations when it gets cold, but biologists aren't sure if the tiger sharks are following their prey, or if they just prefer a warmer climate [source: Heithaus]. The tiger shark is generally thought to be a nocturnal animal, but in some cases, it's been spotted feeding during the day. In Hawaii for instance, tiger sharks are not nocturnal because they frequently eat monk seals, which are diurnal.

Tiger sharks are primarily solitary hunters, and you may only see a group of these sharks when there's a large amount of food nearby. And while tiger sharks spend a lot of time eating and looking for food, at some point, they have to make other tiger sharks. Tiger sharks are ovoviviparous, which means that shark eggs are fertilized and carried within the mother, as opposed to animals that lay eggs that hatch outside.

When tiger sharks mate, the male usually bites the female on her back and fins to hold her in place. When females have been examined in the wild, scientists usually find the remnants of this mating ritual in the extensive scarring on the female's back. Females only bear young about once every three years, perhaps because of the significant pain associated with breeding.

Females then carry for a term of 14 to 16 months [source: Knickle]. Although the average litter size is around 40, tiger sharks can give birth to anywhere from 10 to 80 pups [source: Ritter]. Once born, however, a tiger shark is on its own, even though it's fairly tiny and grows slowly. Juvenile tiger sharks have an elongated tail which makes it difficult to swim very fast. The tiger markings that are typical of younger tiger sharks may be a way to blend in with the waves near the coast, so that larger predators don't find them.