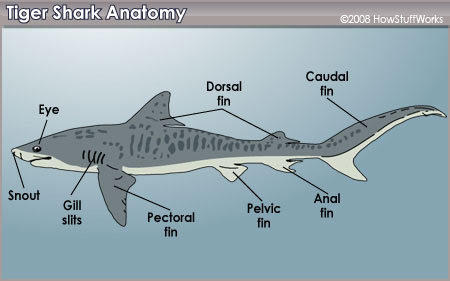 Anatomy of a tiger shark
HowStuffWorks

How will you know when a tiger shark is swimming toward you? As we mentioned, tiger sharks get their name from the tiger -like stripes and spots that are most prevalent on juveniles. The sharks are bluish-green to dark gray on top, with a yellowish or white underbelly [source: Knickle].

Tiger sharks are generally considered slow and sluggish, but their fins are capable of fast bursts of energy when they're tracking prey. Like other sharks, the tiger shark moves with its fins. The main factors in mobility are the pectoral fin and the caudal fin, or the tail. The dorsal fins on top help the tiger shark change directions. Like other shark species, they also have vibration detectors along their sides that help them to detect movement in the water. Tiger sharks have very thick hides, once described by a scientist as six to 10 times the strength of an ox hide [source: Tennesen].

Where does the tiger shark live, and what does it do all day? We'll take a look on the next page.