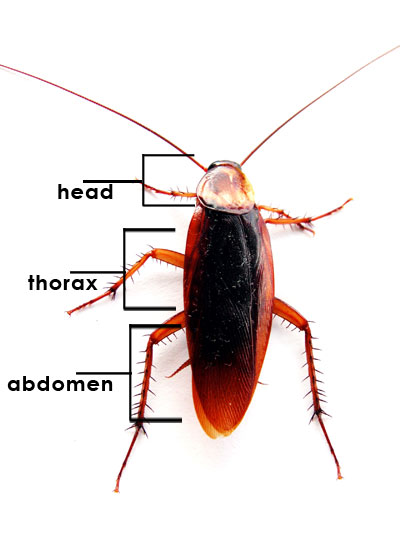 Most people can recognize cockroaches instantly. They're brown or black insects that are usually between half an inch and two inches long (12-50 millimeters), minus their long antennae. Their heads point downward, almost as if they're built for ramming. Males usually have wings, but females often don't. Those that do usually have vestigial wings -- small, undeveloped wings that often don't allow the roach to fly.

Although their reputation often sets them apart, roaches have a lot in common with other insects. Their bodies have three primary regions -- the head, the thorax and the abdomen. They have three pairs of jointed legs, one pair of antennae and a rigid exoskeleton. Roaches shed their exoskeleton, or molt, several times during their lives. After molting, most roaches are white and easily injured until a hormone called bursicon causes the exoskeleton to darken and harden. Sometimes, a roach can re-grow a lost limb when it molts and even put off molting to allow the new limb to grow.

Roaches' heads house their eyes, antennae and mouthparts. Contrary to popular perception, their heads also house their brains. However, much of their nervous system activity takes place in nerve ganglia located throughout their bodies. This is one of the reasons why a headless roach can live for more than a week. The other is that roaches don't breathe through a nose or mouth. Instead, they draw air through spiracles, or holes in their sides. Tubes called tracheae deliver oxygen from the spiracles to organs and tissues. When a headless roach finally dies, it dies of thirst.

Although not as distinctive as the eyes of dragonflies or houseflies, cockroaches' eyes are compound and are made of photoreceptor cells called ommatidia. A hard ring called the ocular sclerite surrounds the photoreceptors. Because of this compound structure, cockroaches see the world as a mosaic.

Movable antennae, also known as antennal flagella, allow roaches to feel and smell the world around them. Although the antennae look like threads, they're really made of lots of tiny, hair-covered segments. These segments are shorter and thicker near the roach's head, and they're longer and thinner near the tips.

Roaches' mouths, like those of other insects, are significantly different from mammals' mouths. However, many mouthparts serve the same function as parts of a mammal's mouth:

Anatomy of a cockroach leg

These three pairs of legs have substantially different lengths and functions, but they have the same parts and move the same way. The upper portion of the leg, called the coxa, attaches the leg to the thorax. The other parts of the leg approximate parts of a human leg:

Each leg moves up and down like a pogo stick and back and forth like a pendulum. The front and back legs on one side move at the same time as the middle leg on the other side. In this way, the roach can move over nearly any terrain.

When a roach is running as fast as it can, its legs move back and forth about 27 times per second. When it runs upside down on a ceiling, it takes longer steps in an attempt not to fall down. In fact, it takes significantly more energy for a roach to run upside down than to run up a vertical wall.

Most insects have a segmented abdomen that contains most of their internal organs, and roaches are no exception. Inside a roach's abdomen, a tube-like heart moves blood to organs and tissues. Unlike human blood, a roach's blood doesn't use hemoglobin to carry oxygen, so it is colorless instead of red. The blood also doesn't travel through an extensive circulatory system. Although an aorta carries blood to specific organs, much of the blood travels through a network of spaces called a hemocoel. Roaches also store fat a little differently than people do. Instead of spreading it throughout most of their physical structure, they store it in one centralized location called the fat body.

A roach's digestive system is located in its abdomen, and much of it resembles a simplified version of a mammal's digestive system. However, a roach's digestive system has a few modifications that let it eat cellulose and other tough materials. One of these is a crop, which holds swallowed food until a toothy section of the digestive tract, called the proventriculus, can pulverize it. Sacs called the gastric cacea hold enzymes and microbes that continue to digest the food. This extra digestive help is particularly important if the roach eats cellulose or wood. Only after the material is thoroughly broken down can the roach's midgut absorb the food's nutrients.

Two segmented cerci lie on the exterior of the lower part of a roach's abdomen. These somewhat resemble antennae, and they can behave as sensory organs. A nerve inside the roach allows it to detect air movement around its cerci. This is one reason roaches can move out of the way very quickly if you try to catch or crush them.

Roaches' reproductive systems are also located in their abdomen. We'll look at this system and at the cockroach life cycle next.

Straight from the Roach's Antenna and Cockroaches as Prey

Often, an antenna will continue to react to stimuli even after it has been removed from a roach. Scientists have taken advantage of this phenomenon to create theelectroantennogram -- an antenna attached to an oscilloscope. Researchers have used this device to study cockroach pheromones, or chemicals used to attract other roaches. These pheromones could be used to make more effective roach baits.

Cockroaches may seem indestructible, but they are food for a variety of other animals. Some species of wasp use cockroaches as incubators for their eggs. A female wasp will sting a roach or remove its antennae to disable it. Then, she will lay her eggs inside the roach, where they will grow until they hatch. In addition, another household pest, the common house centipede, eats cockroach nymphs.