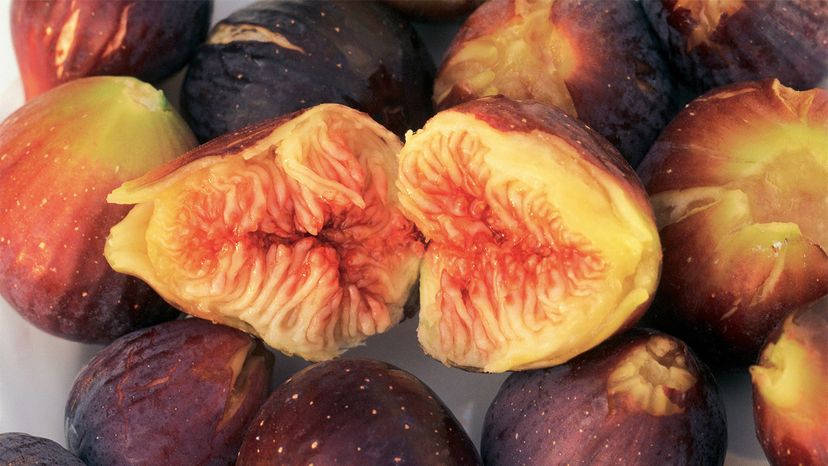 The inside of a fig (Ficus carica) is a beautiful thing to behold, but, wait, what are all those squiggly things and are these luscious fruits really full of baby wasps? DEA/M. CERRI/De Agostini/Getty Images

When it comes to accidental insect consumption, any 12-year-old boy can set you straight: The black do­ts in bananas are tarantula eggs, three centipedes crawl into your mouth every night while you sleep, and, of course, fig bars are full of baby wasps.

A simple internet search easily puts two of these grade-school urban legends to rest. However, an inquiry into the world of figs turns up stories that many people might find more than a little troubling: stories of fig plants teeming with insects and fruit having been split open to reveal hoards of small wasps.

While these stories may not be all that appetizing, there's no reason to swear off figs quite yet. Those little insects are fig wasps, and they play an essential role in the fig's life cycle as the plant's only pollinator. That means that for pollen from one fig plant to reach another plant, fig wasps must do all the leg work. In return, the plant provides fig wasps with their only sources of food and shelter.

This arrangement is called mutualism. Both plant and wasp depend on the arrangement to survive, and without one, you wouldn't have the other.

But what happens when it's time to harvest the figs? Are the wasps still inside? Do the food companies scrape them out before they turn figs into jam? Or were the 12-year-olds right all along — are we really eating a mouthful of sweet baby wasp paste? 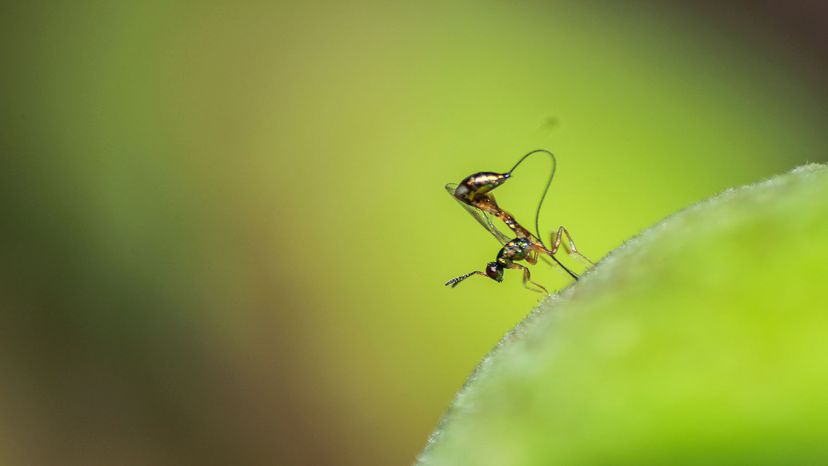 A female fig wasp (family Agaonidae) unfurls her ovipositor to drill eggs into a fig. There are about 900 species of parasitic fig wasps and each species of wasp pollinates only one species of fig. Wikimedia Commons (CC BY-SA 4.0)

To really understand the wasp-eating dilemma associated with figs, you have to first look at the closely connected life cycles of both the plant and the insect. The current mutual relationship between the two didn't happen overnight. It's the result of millions of years of evolution.

What we call a fig (a structure called the syconium) is more inverted flower than fruit, with all its reproductive parts located inside. After a female fig wasp flies over from the fig plant she emerged from, she must travel to the center of the syconium to lay her eggs. To get there, she climbs down through a narrow passage called the ostiole. The passage is so cramped that the tiny fig wasp loses her wings and antenna during her claustrophobic trek. Once inside, there's no getting back out and flying to another plant — but is she in the right place?

If a female wasp enters a caprifig, she'll find male flower parts that are perfectly shaped to hold the eggs she'll eventually lay. The eggs will grow into larvae, which will develop into male and female wasps. After hatching, the blind, wingless male wasps will spend the remainder of their lives digging tunnels through the fig. The female wasps then emerge through these tunnels and fly off to find a new fig — carrying precious pollen with them.

If a female fig wasp enters an edible fig, she eventually dies from exhaustion or starvation. The female flower parts include a long stylus] that hinders her attempts to lay her eggs. She may die, but she succeeds in delivering the much-needed pollen first. So a fig farmer winds up with caprifigs full of wasp eggs and edible figs full of seeds.

Though edible figs may not be filled with baby wasps, doesn't this mean that these figs contain a lot of female wasps who died of loneliness?

Is There a Female Fig Wasp Stuck in My Teeth? 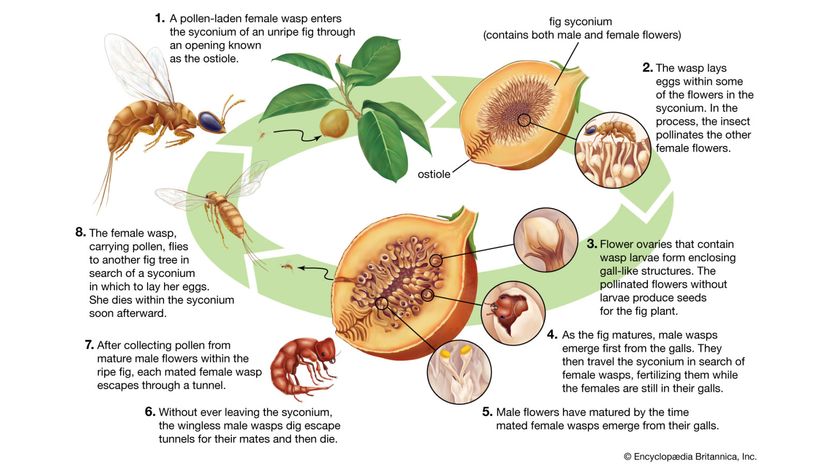 The coevolution between fig wasps and figs has become so profound that neither organism can exist without the other. Encyclopaedia Britannica/UIG/Getty Images)

Most commercially grown figs are pollinated by wasps. And yes, edible figs wind up with at least one dead female wasp inside. But it's still not quite the childhood myth of fruits squirming with insect meat. It's all part of the mutually beneficial relationship that exists between fig wasp and fig plant.

A few points worth remembering about the wasp content:

1. When a female wasp dies inside an edible fig, an enzyme in the fig called ficin breaks down her carcass into protein. The fig basically digests the dead insect, making it a part of the resulting ripened fruit. The crunchy bits in figs are seeds, not anatomical parts of a wasp.

2. Fig farmers want to keep the number of wasps entering edible figs to an acceptable minimum. While the insect's cooperation is mandatory for the fig to ripen, too many wasps entering will result in over-pollination. Then this fig might be filled with so many seeds that the fruit-like syconium bursts open. While this is good for the plant, it hurts the finished harvest for farmers. To prevent this, farmers separate male and female trees over great distances. Farmers also supply a controlled number of new wasps, often delivered in paper sacks, to dictate exactly how many females have access to a given plant. This means fewer wasps inside when the time comes to harvest.

3. It's also important not to get too bent out of shape over the possibility of accidently eating the occasional insect. Even with the use of modern pest control, insects partially contaminate most agricultural products upon harvest and on the way to market. From canned corn to curry paste, from premium coffee to peanut butter, most foods contain insects. For example, when tomato ketchup qualifies for the highest USDA grade standard possible, it's required to contain no more than 30 fruit fly eggs per every 100 grams (3.5 ounces).

For some people, no amount of explaining is likely to suffice. Some vegetarians and vegans refuse to eat figs and fig products based on the possibility of insect content. The dead wasps in question, however, were just playing their vital ecological role. There are 900 species of fig wasp, and each is responsible for pollinating one or two species of fig plant. Without these tiny insects, there would be no figs — and vice versa.

For more information on figs, wasps and other fascinating plant and insect relationships, check out the links that follow. 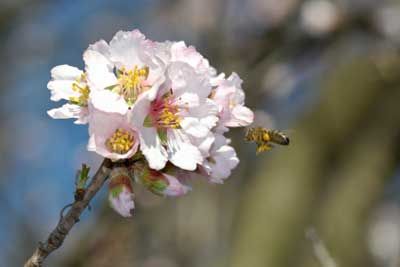 Up Next
How Colony Collapse Disorder Works
Explore More 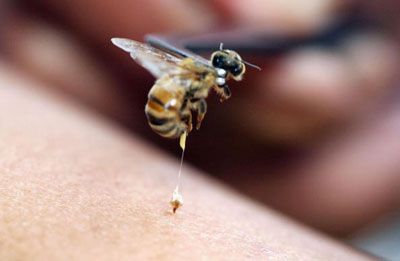 You May Like
What's the difference between bees and wasps?
Explore More 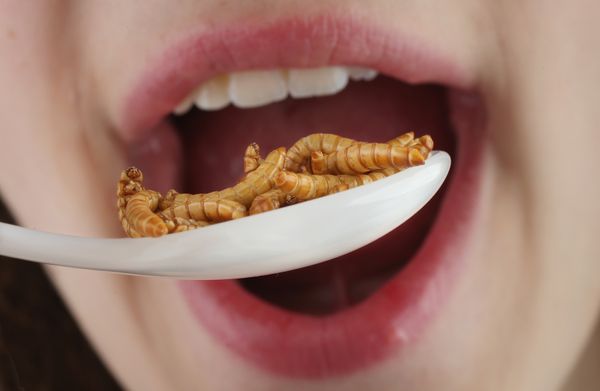 Keep Reading
How many bugs do I eat every year?
Explore More