Orangutans are peaceful apes. In the jungles of Borneo and Sumatra, they spend their days foraging alone or in small groups, climbing trees, eating fruit, avoiding tigers. A female orangutan generally sticks close to the place where she was born, and she doesn't much mind if her territory overlaps with another's. It's a low-drama lifestyle: climb trees, eat fruit, avoid tigers.

Which is why the murder was so surprising.

In a paper published this month in the journal Behavioural Ecology and Sociobiology, researchers reported observing the first lethal female-on-female orangutan attack. That itself is intriguing, but the story of what actually happened reads a little more like a crime drama — and yes, "murder" is technically inaccurate, since it's a legal term invented by humans — than a scientific paper.

The story revolves around two unrelated adult female orangutans, Sidony and Kondor. Both subjects of the University of Zurich's Tuanan Orangutan Research Project living in the Indonesian wild. Over the course of 11 years and 26,000 hours of observation of neighborhood females, Sidony and Kondor had not always gotten along. For instance, Sidony, who was about 20 years Kondor's senior, was observed in 2009 chasing a then-adolescent Kondor away from her 7-year-old daughter, smacking and biting her as Kondor persisted in her approach.

By July of 2014, Kondor was full grown and had already given birth to her first baby. Her infant had died a few weeks earlier, and Kondor was already being courted by a young male named Ekko.

The orangutan named Sidony, the victim of an unprecedented lethal attack.
Anna Marzec

Kondor and Ekko were "officially a thing" at the time they wandered into the middle of Sidony's territory. This is usually no big deal to female orangutans — they don't defend their territories, and usually don't complain about sharing space. However, once in Sidony's territory, Ekko approached Sidony and her 4-year-old son, Sony. He gave her the once-over, and then returned to Kondor to mate with her. When Sidony didn't immediately retreat, Kondor interrupted their lovemaking to attack the older female. Ekko immediately joined her, and not merely by way of suggesting to the older female that they'd like some privacy.

For a half an hour, Kondor and Ekko took turns relentlessly beating and biting Sidony, who never actively defended herself. Sometimes they attacked together, other times one of them assaulted her alone while the other blocked her escape. This attack lasted until Guapo, an older male, came to Sidony's defense, shielding her, but not using physical force. Over the next few days, Kondor continued to try to attack the severely wounded Sidony, Guapo always intervened on the older female's behalf, and always without using direct violence.

Sidony was last seen alive 12 days after the incident, and was found dead on the 16th day due to wounds sustained during the attack.

"We reported this case because it was not only first lethal aggression in orangutans,” says researcher Anna Marzec, a doctoral student at the University of Zurich, via email, “but also because it was very different from lethal attacks reported for other primates."

For starters, females don't normally attack other females; when a primate attacks to kill, the instigator and aggressor is practically always male. Secondly, the target of this attack was not Sidony's child, but Sidony herself. Although infanticide is practically unheard of in orangutans, by either males or females, baby killing is not all that uncommon in other primates like chimpanzees. However, even though Sidony had a young child, Sony was not harmed in the attack, which rules out that motive.

Finally, this interaction was unusual because it was different from joint attacks observed in any other primate. For instance, it's normal enough for chimpanzees to get together to launch a lethal surprise attack on an individual or another band of their own sex — and it's far more common for the attackers to greatly outnumber the victims. But in this case, Kondor enlisted the help of only one other individual, and one of a different sex, to attempt to kill another female. It's all highly unusual.

The question is: Why did it happen this way?

One reason might have something to do with habitat loss. As orangutans lose habitat to logging, mining and fires, their territories become smaller, which puts them in each other's way more often. And unusual circumstances can lead to unusual behaviors.

Another answer could lie in the easy-going pace of the orangutan breeding cycle. Most females only give birth every seven to nine years. Marzec adds, "It is in male interest to stay in long association with sexually attractive female to increase his chances of siring her next offspring. This is what we think drove Ekko to participate in attack: he supported Kondor in order to prolong the association with her."

Now That's Cool
Indonesia is home to a number of conservation-minded "forest schools" where humans teach orphaned orangutans, who've often lost their parents to poaching and logging, how to survive in the wild.

Can You Get a 'Secret Divorce'? 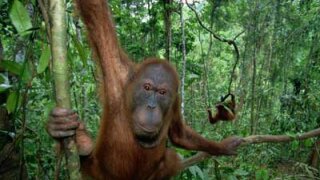 Should We Worry About Apes Learning to Use Hanguns?