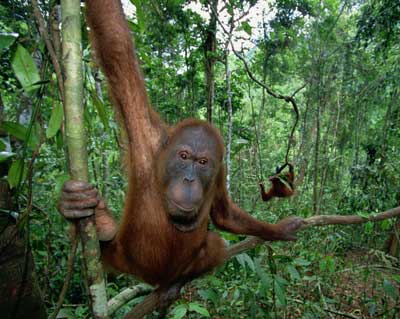 In the world of great apes, you could call orangutans the outcasts. Of the four species of apes, orangutans are the only ones found in Asia-- gorillas, chimpanzees and bonobos all come from Africa. And unlike their mostly terrestrial relatives, orangutans spend almost their entire lives in trees. Their long, powerful arms, which can reach 6.6 feet (2 meters) in length, are perfect for swinging from branch to branch and their feet are more like hands in terms of dexterity and grasping strength [source: World Wildlife Fund].

These arboreal adaptations make orangutans about as awkward on the ground as they are graceful in the trees. For them, walking along the floor of the tropical and subtropical forests is a slow and cumbersome task. Since everything they need is available within the treetops, orangutans tend to stay aloft. They build sleeping nests from leaves and branches, and they dine on bark, leaves, flowers and more than 300 kinds of fruit collected by swinging from tree to tree [source: Orangutan Conservancy].

Aside from their physical and geographical differences, many orangutans are significantly less social than their African counterparts. Whereas chimps are well known for their complex social interactions, orangutans tend to stick to themselves, earning reputations as being loners or orangutan introverts. However, new research shows that these apes might not be quite as anti-social as first thought. Looks can be deceiving, and under that shaggy red exterior there may be a party animal just waiting to get out. 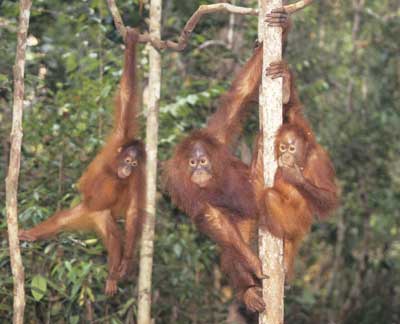 Although orangutan society is admittedly less gregarious than other ape groups, that fact alone doesn't automatically make them introverts. In fact, orangutan mothers take care of their offspring until they're 7 or 8 years old -- one of the longest child/parent relationships of any animal in the world [source: Mayell, Orangutan Conservancy].

And while adult orangutans primarily hang out alone or in very small groups, they may be forced into that solitary lifestyle because of the converging factors of high caloric needs and limited resources. Orangutans are roughly 4.1 to 4.9 feet (1.25 to 1.5 meters) tall and weigh between 66 and 110 pounds (30 and 50 kilograms) for females and between 110 and 198 pounds (50 and 90 kilograms) for males [source: World Wildlife Fund].

Needless to say, maintaining such a physique on little more than vegetable matter requires a lot of work -- especially when food isn't widely abundant. This lack of food distribution limits the orangutan's ability to congregate. Say you're at a party in a high rise, and everyone is famished. There's going to be a lot less socializing if the cookies and punch are scattered throughout the building's 17 floors. Orangutans may simply live in a poorly planned jungle party.

Many scientists admit as much, saying that it's probably more accurate to label orangutans as "solitary but social," rather than semi-solitary. It may just seem like semantics, but there's a difference. Semi-solitary implies that their lifestyle is self-imposed, whereas calling them solitary but social indicates that they would be social if not for mitigating circumstances.

To further prove the point, researchers have observed orangutans using tools and signals -- evidence of learned behaviors that require close social interaction. Signals varied between different populations, indicating that the knowledge was culturally transmitted and not simply acquired individually or innately.

Dr. Carel van Schaik, a Dutch primatologist, discovered a group of orangutans in a highly productive swamp forest in northern Sumatra that were "every bit as sociable" as chimpanzees [source: Rogers]. It turns out that when orangutans live in a place where they don't need to compete for food, they socialize in large groups and even share with one another. The swamp had the highest density of orangutans ever recorded [source: Rogers].

So perhaps orangutans aren't quite the introverts initial reports made them out to be. Throw them a good enough party and they're all over it.

For more on orangutans and how you can help ensure they continue partying for many years to come, swing through some of the links on the next page.

Tricks of the Trade and Disappearing Act

Orangutans share 97 percent of our own DNA, perhaps explaining their high level of intellect. In fact, orangutans sometimes score higher on the tool-using tests than chimpanzees [source: Cawthon Lang]. When it comes to using those tools, orangutans are a pretty creative bunch. They use sticks to get honey and insects, craft and use leaves for makeshift umbrellas and toilet paper, and fashion back scratchers out of branches. One group of daredevil orangutans came upon some boats near a river and figured out how to go on a joyride. They untied the boats and rafts that were secured with knots, pushed off and set sail.

Orangutans, now found only on the islands of Sumatra and Borneo, are among the most critically endangered of the great apes. Deforestation has destroyed more than 80 percent of their habitat during the last 20 years, and some conservationists estimate there may be as few as 15,000 of them left in the wild. Due to habitat loss from slash-and-burn methods (in order to plant oil palm plantations), logging, poaching and the illegal pet trade, orangutans could disappear from the wild in as few as 10 years [source: Mayell, Orangutan Conservancy].