Baby Giraffes Get Their Spots From Mom

Browse the article Baby Giraffes Get Their Spots From Mom 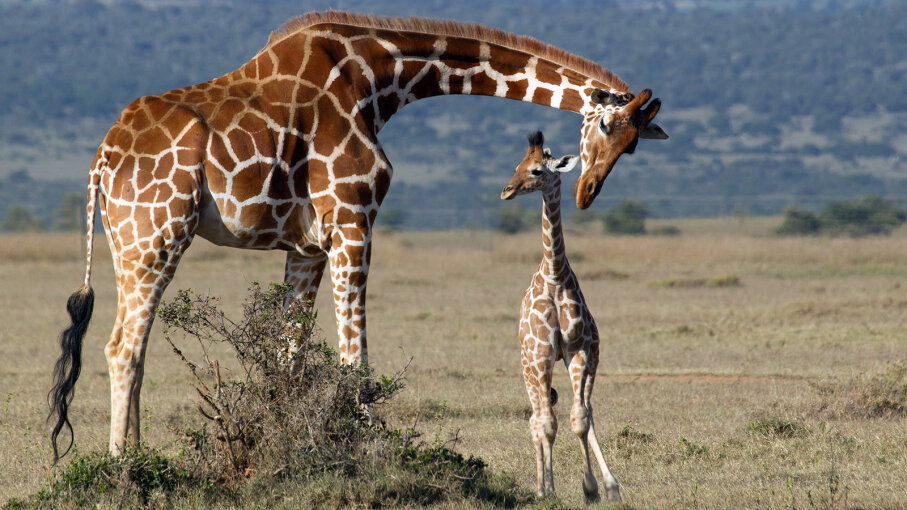 Mom and baby reticulated giraffe seen together on the plains of Laikipia, Kenya. Robert Muckley/Getty Images

When you think of a giraffe and its spots, you might wonder "why they even bother?". Giraffes are so tall and have such long legs and long necks, these lanky creatures reach high into the trees. Who do they think they're fooling with those spots? They can't be camouflage; everyone can see these massive, graceful beasts parading around the grasslands of sub-Saharan Africa, right?

Sure, everyone can see adult giraffes, which are the tallest mammals on the planet, but vulnerable little baby giraffes could use some help in the camo department. A new study published Oct. 2, 2018, in the journal PeerJ shows that giraffes inherit their spot patterns from their mothers — and those spot patterns make a difference in the young giraffes' ability to survive.

Camouflage is only one function that those spots might serve, though. Derek E. Lee, associate research professor at Penn State University and lead author of the paper, said in a statement "we don't really know their purpose in the wild." The spots might indeed be camouflage, but they might also help regulate body temperature and enable giraffes to recognize each other.

Under their fur, giraffes have dark gray skin with no spots at all. But the fur has spots that can be round, oval or blobby, with sharp or smooth edges, and every shape and state of definition in between. They're variable, but the spots remain the same throughout the giraffe's lifetime. That allows researchers (and probably giraffe moms) to recognize individuals.

Researchers were able to confirm that spot attributes, like sharply defined edges, are passed from mom to baby. In this study, newborns that had larger, more irregular spots were more likely to survive the first few months of life.

This new finding is an update of an old hypothesis. Dr. Anne Innis Dagg observed a small zoo population of giraffes and noted that the shape, number, area and color of their spots seemed to be passed down. The latest study used computer imaging and analysis to compare 11 traits found in the spots of giraffes in the wild. The method could be used for studying other animals patterns too, like cheetah spots or zebra stripes.

Now That's Cool
Dr. Anne Innis Dagg has been called "the Jane Goodall of giraffes" for her groundbreaking early work studying giraffes in the wild. With a $500 prize for biology and personal savings, she left for South Africa in 1955 and studied these leggy beasts, often observing them from her car. She is currently an adjunct professor at the University of Waterloo, where she earned her doctorate in animal behavior in 1967.