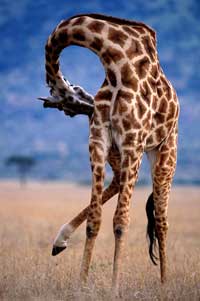 Thanks to their towering necks, giraffes can grow as tall as 19 feet (6 meters).
Anup Shah/Getty Images

Giraffes tower above all other mammals in the world. Loping along the African savannas on skinny, stiltlike legs, adult male giraffes can top out at 19 feet (6 meters) [source: National Geographic]. But only around half of that height comes from their stems -- the rest is all neck. Then, if all of that length wasn't enough for these spotted giants, they have yet another tool to expand their reach. Giraffes' tongues can stretch as far as 18 inches (46 centimeters) to snag even the highest hanging leaf [source: San Diego Zoo].

In regard to the long neck, scientists continue to scratch their heads about the exact evolutionary path the animal's ancestors took to instigate such a unique adaptation. One of the most compelling pieces of this puzzle is that the great expanse of neck contains a mere seven vertebrae. That's the same number of vertebrae that humans and almost all other mammals have.

For an explanation, many point to giraffes' preferred snack of acacia leaves, which would make the added extension necessary for craning to the tops of these 20-foot (6-meter) trees. However, giraffes also spend time, particularly during the later part of the day, with their legs splayed out, munching on grasses and low-lying shrubs [source: Dagg and Foster].

Or perhaps it came about to impress the shorter-necked ladies. Giraffe males, called bulls, will duke it out in a neck-to-neck competition for female giraffes. Similar to rams locking horns in heated battles, the bulls use their hefty necks to strike each other with crushing force. Survival of the fittest would suggest that the ones with the longest and strongest would win.

Whatever the case, those seven vertebrae dwarf the ones found in our bodies. In fact, each giraffe neck vertebra may be as long as 10 inches (25 centimeters) [source: San Diego Zoo]. As you can guess, that doesn't exactly make for a light load to tote. Stack up those seven blocks of bone and toss on a head, and we're talking around 600 pounds (272 kilograms) of cargo [source: San Diego Zoo].

How do these lanky quadrupeds support their upper halves, much less move them around? Go on to the next page to find out the secrets inside nature's longest neck.