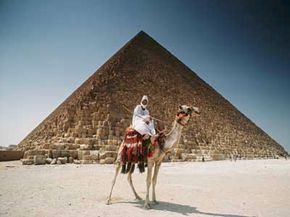 It makes sense that Eskimos have an extensive list of words to describe snow. Snow dictates their way of life and is linked inextricably to their identity in and outside of their culture. On the other side of the world, where snow never falls, nomadic bedouins in the Saharan region show a similar verbal variety in regard to camels. When referencing the tawny mammals, desert-dwellers have more than 700 related words at their disposal.

If you compare bedouins to cowboys of the American West, camels are ostensibly the horses and cows of the desert. The long-lashed ungulates (hoofed animals) provide transportation, fuel (from their excretions), nutrition and material for clothing and shelter. Even in the harsh desert environment, camels can haul heavier loads across short distances than what elephants can carry [source: Simmons]. Able to travel between 25 and 30 miles (40 and 48 kilometers) per day, camels won't get you anywhere fast, but perhaps more importantly in the scorching conditions, their engines won't break down along the way.

­Considering their distribution in northern Africa, southwestern Asia and the Middle East, it may surprise you to learn camel predecessors originated in the Western Hemisphere, and the camel's family tree includes llamas, alpacas and vicuñas. Equipped with ears and nostrils that can shut tightly to block out sand, camels are cud-chewers, dining on the sometimes scarce plant selection in lowland steppes, grasslands and desert climates. Look closely at their feet, and you'll notice they have broader hooves than horses, which allow camels to effectively distribute the heat from the toasty ground and walk through the sand more easily [source: Simmons].

Of course, you can't talk about these animals without saying a few words about how camels store water and their signature humps. The easiest way to tell the two camel species apart is by counting the number of humps. Dromedary camels, which are the more abundant species, have a single hump; Bactrian camels have two. If you were to slice off a hump from a healthy camel and put it on a scale, it might weigh up to 80 pounds (36 kilograms).

So, that's an 80-pound (36-kilogram) hump filled with water, right? Quite the opposite.

Camel Humps and Other Water-saving Tactics 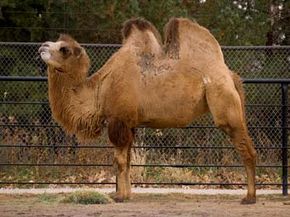 Camel humps are made up of fat, not water.
Joel Sartore/Getty Images

A hump full of water could come in handy in a camel's line of work, but these bulges are actually filled with fat. That store of fat is like a spare tank of gasoline in your car trunk. When food and water become scarce, the camel extracts energy from that mound of fat. In fact, the longer a camel goes without eating or drinking, the more visibly deflated its hump becomes. But give it adequate water and food, and camel humps plump up in a matter of days.

So just how long can a camel go without water before its hump starts to slump? In How long can you go without food and water?, we learned that humans can last only three to five days without any water in temperate conditions. During winters in the Sahara Desert, camels have been known to survive six or seven months without actually drinking [source: Lumpkin]. Granted, camels get liquid from the plants they eat during that dry spell, but it's still an incredibly long time sans drinking water. In peak summer months, when the mercury rises higher than 110 degrees Fahrenheit (37 degrees Celsius), their nonhydrated stamina drops to around five days [source: Lumpkin].

Camel physiology has two major adaptations compared to other mammals, which explains this ability. First, a camel's internal body temperature has a far greater range than our bodies. During the hottest months, a camel's temperature may fluctuate between 93 and 105 degrees Fahrenheit (33 to 40 degrees Celsius) [source: Burton and Burton]. To protect their brain tissue from heat spikes, their brains can selectively cool themselves while leaving the core temperature in the rest of the body unchanged [source: Elkhawad]. Camels can also lose a higher percentage of their body fluids without disrupting their health. For instance, dehydrated humans will usually die if they lose more than 15 percent of their weight in body fluids. Camels, however, may drop almost 40 percent of their body fluid weight before conditions become fatal [source: Animal Planet].

These adaptations are due, in part, to the shape of camels' bloodcells. Unlike human blood cells that are disc-shaped, camels have elliptical blood cells [source: Burton and Burton]. This football shape promotes blood flow, allowing the cells to continue moving even when water intake has stopped. Also, camels' blood volume doesn't drop when water levels drop, as it does in humans [source: Simmons].

When it comes to food, camels have a way of truly savoring every bite. Camel lips are so thick that they can grasp leaves, thorns and other vegetation without losing moisture off their tongues [source: Simmons]. Once they swallow the food, three stomachs redigest it multiple times to extract all potential nutrition [source: Binns]. After camels finish breaking down their dinner, they lose little water to excretions. Their feces are very dry (allowing bedouins to burn them for fuel), and they urinate less than most mammals.

Camels even sweat efficiently. Not only do they perspire at a lower rate than we do, their sweat evaporates beneath their fur for better cooling [source: Lumpkin]. When standing still or resting, camels often face the sun to reduce the amount of body surface area directly exposed to the sunlight. They also seek out shade and stand in each others' shadows when traveling in caravans [source: Lumpkin].

Like the thrifty vacationer who takes full advantage of complimentary breakfast buffets at hotels, camels make the most of their liquid reward when they reach an oasis. They rehydrate faster than any other mammal, able to gulp down 30 gallons (113 liters) of water in just 13 minutes [source: National Geographic]. After all, the wise camel knows that the next pit stop will be a long, dry walk away. 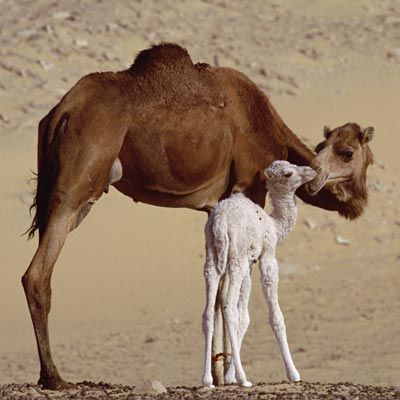 Up Next
Do the humps on camels hold water?
Explore More 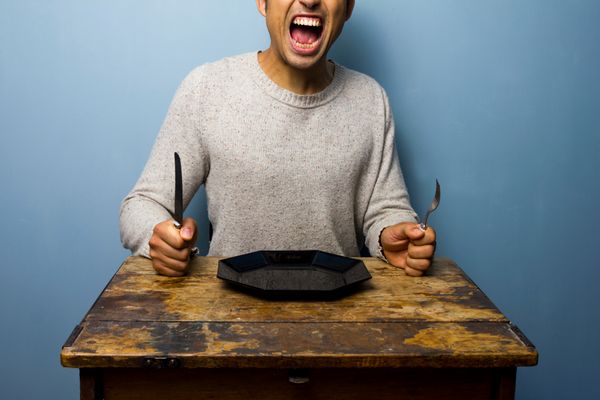 You May Like
How long can you go without food and water?
Explore More