Did people initially think the duckbill platypus was a hoax? 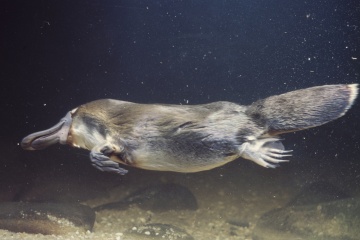 The duckbill platypus is one of the most intriguing animals in the world, so much so that most people are still wrapping their heads around how they an exist.
JohnCarnemolla/Thinkstock

Before we address the question at hand, let's talk a little about our friend the platypus. While no one would argue that the platypus is anything less than an entirely exceptional creature, people still stubbornly insist on comparing it to several different animals. You can't just call a platypus a platypus. Instead, it's a duck-otter-beaver hybrid. Such descriptions give short shrift to our duck-billed pal, however, because platypuses have several extraordinary features that are wholly unique.

Consider their venomous toes. Platypuses have stingers on their rear feet that deliver a powerful punch of poison to an opponent. As if that isn't cool enough, their awkwardly cute bills are also secretly sophisticated electro-sensory organs designed to help them navigate through dark and murky waters [source: Patel]. They also have a large toe web that makes them extremely swift swimmers but doesn't impede progress on land. They can even fold the web back for easy digging. And they can use that beaver-like tale, remember, to steer in the water with ease as well [source: The Genome Institute].

So ends the propaganda campaign for your friendly neighborhood platypus. Now that we know that they're cool and unique, is it really true that their extraordinary coolness initially made them unbelievable?

You bet. British naturalist George Shaw first made scientific observations of a specimen of platypus that was brought back from the new, burgeoning colony of Australia in 1799. He absolutely thought the platypus was some sort of hoax and even cut the pelt with scissors in a vain attempt to try and find the stitches that attached the bill to the pelt [source: Australian Platypus Conservancy].

Now, let's not make fun of poor George Shaw. During the 18th century, loads of swindlers were grafting animals together with taxidermy and claiming they'd found new species. So Shaw can be forgiven for thinking that the strange duck-beaver-otter was a fake.

And hey, there are still loads about the platypus to study. The platypus genome was sequenced to learn more about monotremes, a type of mammal that lays eggs but produces milk [source: The Genome Institute]. (Uh, yeah, as if you were wondering if the platypus wasn't strange enough already.) It also represents the primal mammalian line, which can tell us quite a bit about how mammalian evolution works.

So there you have it. The platypus was indeed thought to be a hoax at first, but don't let yourself be fooled. It's actually a pretty extraordinary creature that deserves credit for its uniqueness.

Are zebras black with white stripes or white with black stripes?
Squirrels Can Be Left- or Right-handed
Grass Gobbling Goats Are Gardening Away at O'Hare, Google