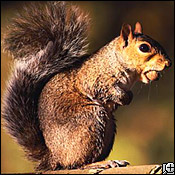 The eastern gray squirrel's natural habitat is the hardwood oak, hickory, and walnut forests of eastern North America, where its numbers are controlled by resource availability and predators such as bobcats, owls, and foxes.

It was introduced in Britain, where it has become an agricultural pest and out-competed the European red squirrel.

The species is a daytime forager, enjoying diverse foods such as pine-cone seeds, nuts, berries, insects, birds' eggs, and occasionally sap from under the bark of new trees.

An adult may eat up to three ounces (80 g) of shelled nuts in a day.

It stores nuts by burying them in the ground throughout its range, and thus the species is important in the distribution and propagation of trees.

It usually makes its nest of leaves in a cavity or crotch of a tree.