Will I die if I eat polar bear liver?

Vitamin A in Polar Bear Liver

Prev NEXT
Seals are the primary source of food for polar bears and the major reason for their high levels of vitamin A. Delta Images/Getty Images

Vitamin A is a crucial building block for many animals. Humans only require it in very small amounts, but it plays a vital role in eyesight, reproduction, fetal development, growth, immune response and the cellular formation of tissue. We typically absorb it through the consumption of foods such as spinach, broccoli, eggs, milk and various meats. Vitamin A tolerability in humans varies depending on age, gender and physical condition. Your own personal tolerable upper limit depends on how efficient your enzyme system is, and how efficient your liver is at storing vitamin A. While the tolerable upper limit for healthy adults is set at 10,000 IU, signs of toxicity generally occur when approximately 25,000 to 33,000 IU are consumed [source: Higdon].

Without enough vitamin A in your system, you could easily find yourself facing symptoms just as bad as those associated with hypervitaminosis A. Deficiencies can lead to dry skin, diarrhea, blindness, growth retardation and even death.

Polar bears aren't immune to the dangers of consuming too much or too little vitamin A; they're affected just as severely by excess or deficiency. The only difference is that polar bears have a much higher tolerance for vitamin A. For instance, a healthy human liver contains 575 international units (IU) of vitamin A per gram while a polar bear's liver contains between 24,000 and 35,000 IU per gram [source: Eliasen]. Compare that to the tolerable upper level of vitamin A intake for a healthy adult human: 10,000 IU [source: Higdon].

Like many animals, polar bears benefit from keeping a certain amount of vitamin A in their system, but there's nothing to indicate they actually require such large quantities. In fact, their physiology evolved to tolerate so much vitamin A for only one reason: to eat seals.

In the wild, polar bears feed almost exclusively on bearded seals and ringed seals, both of which store high levels of vitamin A in their livers and blubber. If you ate a bearded seal's liver, you'd suffer from hypervitaminosis A, but the polar bear can tolerate and enjoy the feast. The seals store high levels of vitamin A in order to swiftly grow and nourish their young in a harsh, chilly environment. Remember, vitamin A plays a key role in growth and natal development. The seals rely on this vitamin to quickly advance them through their vulnerable pup stages.

So if the blue plate special at your favorite diner is ever sautéed polar bear liver, you might just want to stick with a salad. Explore the links below to learn more about vitamin A and polar bear liver.

One polar bear liver typically contains as much vitamin A as 79 to 115 chicken eggs. According to the International Federation of Competitive Eating, the current world record for egg consumption is 65 hardboiled eggs in 6 minutes and 40 seconds, held by Sonya Thomas [source: IFOCE]. That award-winning meal comes in at nearly twice the tolerable upper limits of human vitamin A consumption. 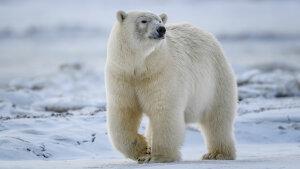