When it comes to feeding their offspring, there's no snubbing in the golden snub-nosed monkey (Rhinopithecus roxellana) family. In fact, researchers in the Shennongjia National Nature Reserve observed females engaging in what's called allomaternal nursing. That means they witnessed infant monkeys being nursed by females other than their mothers.

The findings from the study, which were published on Feb. 20 in the journal Science Advances, are especially interesting because this behavior was thought to be rare to nonexistent in Old World monkeys like the snub-nosed, which are, by the way, considered endangered. Allomaternal nursing exists in other species of mammals, as well as some prosimians, New World monkeys and even humans. But this was the first time it had been documented in golden snub-nosed monkeys.

During the research period, which was conducted over the course of five birth seasons, scientists observed 40 out of 46 infants allonursing from "non-mothers." Additionally, 22 out of 46 nursed from at least two additional females. The allonursing occurred largely between relatives in the group — grandmothers and aunts, for instance — and it lasted for about the first three months of the infants' lives.

Researchers say the behavior was apparently reciprocal. Around 90 percent of mothers nursed another female's baby if that female had previously nursed their own, the study says.

The research was led by Zuofu Xiang, a professor of zoology at Central South University of Forestry and Technology in Changsha, Hunan, China.

This is the first time the behavior has been seen widespread in any group of Old World monkeys, which are native to Asia and Africa, and include baboons, macaques and langurs. New World monkeys, on the other hand, comprise five families of monkeys that inhabit Mexico, Central America and South America.

"Although there are many primates that live in social groups, the majority of species do not nurse each other's young," Kirsty MacLeod, a behavioral and evolutionary ecologist at Lund University in Sweden, told National Geographic, "so this report of allonursing in golden snub-nosed monkeys is significant and interesting."

One theory on why they share nursing: The extra nourishment could help offspring develop more quickly to ready for the coming winter.

"Infant mortality in wild snub-nosed monkeys during their first winter can be very high (more than 55 percent)," the study said. "If infants have not reached a threshold level of development before the onset of winter, then they may be unlikely to survive winter." During the observations, four of the six infants who were not nursed by another female died during winter, compared to just six of the 40 infants who were allonursed.

A female golden snub-nose monkey is seen here with two young monkeys.
Zuofu Xiang
Now That's Interesting
The Myanmar snub-nosed monkey (Rhinopithecus strykeri) was discovered in 2010 in the forests of northern Myanmar. It has a short, turned up nose and when it rains, water gets in its nostrils causing the little monkeys to sneeze.

Do Hangover Patches Work? We Put One to the Test 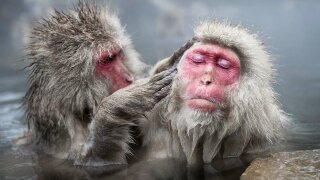 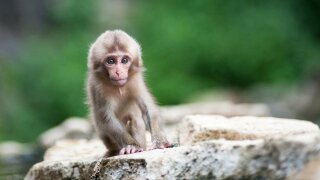 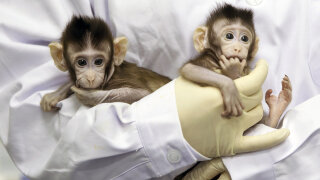