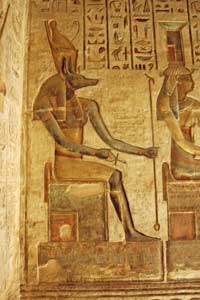 The Egyptian god Anubis had the head of a jackal and body of a man.
©iStockphoto/AmandaLewis

­In ancient Egyptian culture, the god Anubis ruled over cemeteries and protected bodies in the afterlife. Standing tall and foreboding with the head of a jackal and the body of a man, the patron deity of mummification held a crook-shaped flagellum of Osiris to symbolize his authority in the underworld. Certainly, jackals were predominant along the landscape in ancient Egypt considering that they were the most abundant wild dog, or Canid, in Africa in those days. The Canid family includes the jackal, wolf, fox and wild dog. Today, their habitat has shrunk due to industrialization and development, but jackals remain among the least threatened wild African canid species.

Three species of jackals roam sub-Saharan Africa, southeast Asia and southeast Europe. The tawny golden jackal prowls in the open, grassy plains; black-backed jackals with signature dark stripes down their spines inhabit the savanna from Sudan to South Africa; the side-striped species prefers to prowl near water sources in dense­ vegetation [source: African Wildlife Fund]. Though some adult jackals lead solitary lives, males and females may also mate for life. Jackal packs follow a looser hierarchy than the rigid ­wolf pack organization; they're usually made up of a mating pair, their offspring and, in larger packs, nonbreeding adults.

­Females give birth to litters between four and six pups, which she hides in burrows or dens for protection. Jackal pups are most vulnerable from birth until around 14 weeks. For the first two months, adults feed the pups regurgitated food like baby birds; an omnivorous species, jackals may eat anything from small carrion to insects and garbage. Adults return to the den every couple of hours to check up on the pups, and even after they're weaned, pups stay close by adults for the remainder of their first year.

Though male jackals will spend time with their offspring in their burrow, the females bear most of the responsibility for postnatal care. Just like energy-strapped human mothers will call in reinforcements to assist with those first crucial weeks following childbirth, so might jackals (particularly of the black-backed species) call up the babysitters. 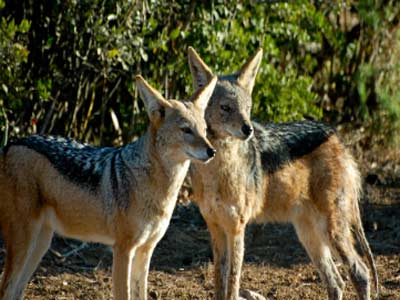