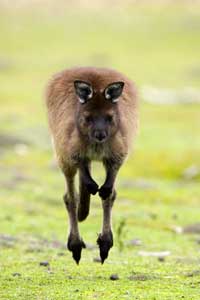 Take a close look at a kangaroo's hind foot and you'll notice that its toes aren't symmetrical like ours. Instead, kangaroos have an enlarged fourth toe on each foot. Starting from the inside of the foot, a kangaroo's first toe is tiny and may not even be present [source: Myers]. The second and third toes are small and appear fused together, though there are separate nails. Things get exciting when we reach the fourth toe since it's at the center of the hopping action. A kangaroo's leg bone aligns with this oversized digit, allowing it to propel the foot off the ground. According to fossils, this adaptation of the enlarged fourth toe preceded the kangaroo's hop [source: Flannery]. The fifth toe provides additional support and thrust for the hop as well.

Traveling up the foot to the hind leg, we hit the powerhouse of the kangaroo's hop. The strong, elastic tendons in its legs store energy for jumping. Think about sitting on top of a spring. If you press your weight down to compress the spring as much as possible, you'll get a decent bounce when you relax. In the same way, whenever a kangaroo's feet hit the ground, its tendons compress to gather elastic energy for the kangaroo to rebound.

To stabilize that motion, the kangaroo's sizable tail acts as a counterbalance to its hind feet. If you watch a kangaroo hop in slow motion, you'll see the tail moves down to meet the feet almost in midair. As the marsupial lands, the tail raises. By transitioning from that horizontal position, when the feet are on the ground, to being quasi-vertical, the tail's downward thrust helps propel the kangaroo up. This counterbalance effect is similar to what happens when you ride a see-saw.

Put all of this together, and what do you have? The red kangaroo motors along at average speeds of 15 to 20 mph (24 to 32 kph) [source: Domico]. A single hop can propel it 25 feet (7.6 meters) forward and 6 feet (1.8 meters) high [source: National Geographic]. Your backyard trampoline might be the closest way you'll ever get to experience kangaroo travel.

So what's the point of these Aussie aerobics? It's all about conservation. To figure out exactly why kangaroos hop, researcher Terence Dawson hooked roos to treadmills and measured their speeds and energy outputs [source: Flannery]. The result? At higher speeds, kangaroo hopping ranks among the most energy efficient means of land travel in the animal kingdom [source: Dawson].

You see, when kangaroos speed up, they don't increase the frequency of their hops, but rather the range. The greater the range, the more energy they harness in their muscles and tendons after they touch down. With a heart twice as big as comparably sized mammals, kangaroos have a naturally strong physical endurance [source: Flannery]. Even their respiratory systems operate more effectively during this exercise. The motion of landing and jumping causes their stomach muscles to contract and expand, forcing air in and out of their lungs without spending extra energy doing so [source: ­Domico].

At lower speeds, however, the efficiency drops off [source: Dawson]. When a kangaroo needs to graze or move slowly, it uses its tail as a fifth leg, balancing back on it and shifting forward with its smaller front legs, referred to as pentapedal walking [source: Dawson]. Kangaroos don't walk on all fours because, except when swimming, they can't move their hind legs independently of each other [source: Myers].

But why walk when you can hop, anyway?

For more information about kangaroos and other marsupials, visit the links below. 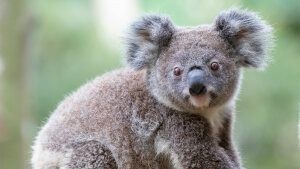 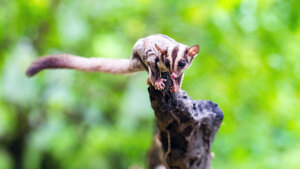