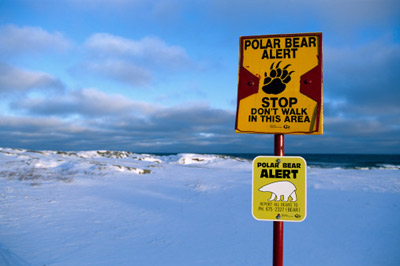 Not in my backyard. Residents of Churchill, Manitoba are warned to keep an eye out for polar bears.
Konrad Wothe/Minden Pictures/Getty Images

Modern zoos around the world keep polar bears, often trying to emulate their natural habitats as much as possible. A zoo is pretty much the only place where it's safe for a human to get anywhere near a polar bear.

With sea ice melting, polar bears are frequently forced to move onto land in the warmer months. More polar bears on land -- looking for sustenance where their natural prey is absent -- means more interactions with humans, and more attacks. Polar bears don't seek out confrontations, but if they're really hungry or feel threatened, they'll kill -- and eat -- a human without a second thought.

Still, attacks are extremely rare, and they're always by a bear that's either starving or provoked [source: Polar Bears International]. The town that hosts the most polar bears in the world, Churchill, Manitoba, has had two people killed by polar bears in almost 300 years [source: Polar Bears International]. The first attack took place after several teenagers came upon a bear and started throwing rocks at it. The second attack was on a man who had meat in his pockets and happened to come upon a hungry bear.

In the last 30 years, eight people have been killed by polar bears in United States and Canada. In all of recorded Russian history, polar bears have killed only 19 people [source: Polar Bears International]. In the town of Svalbard, Norway, which covers an area about the size of Maryland, the population consists of 2,300 people and 3,000 polar bears. The town posts polar-bear warning signs the way other areas post deer-crossing signs. In such close quarters, there have been just four fatal attacks in the last 35 years. When the bears venture too close to humans, residents try to scare them away, revving snowmobile engines, sending up helicopters or shooting flare guns. As a last resort, if the bears won't leave the area, they'll shoot them to avoid an attack. The people of Svalbard had to kill 24 bears between 1998 and 2005 [source: AFP].

With only 25,000 polar bears left, 24 lost in a single town in the interest of protecting humans is actually quite a few. As food and proper hunting grounds continue to dwindle, interactions between polar bears and humans will increase, necessitating more shootings. It's a vicious cycle that starts with climate change and could end with an extinct species in the next 40 years.

For more information on polar bears, including what's being done to try to save them, paw through the links below.

The native Inuit people of Alaska had the utmost respect for Nanuk, the polar bear, even as they hunted it for food and clothing. They believed polar bears were near-human. Some tribes spoke of "polar bear men" who lived in igloos and shed their bear skin when no one was looking. After killing a polar bear, an Inuit hunter would hang skins in his igloo and make offerings of tools for several days. Inuit believed the bears chose to be killed to obtain tools that they found useful in the next life. If a hunter made a really good offering, the bear's soul would let other bears know that if they let themselves be killed by that particular hunter, they would have all the tools they wanted. 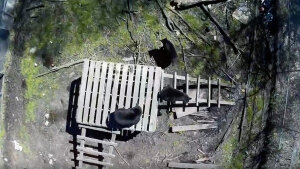