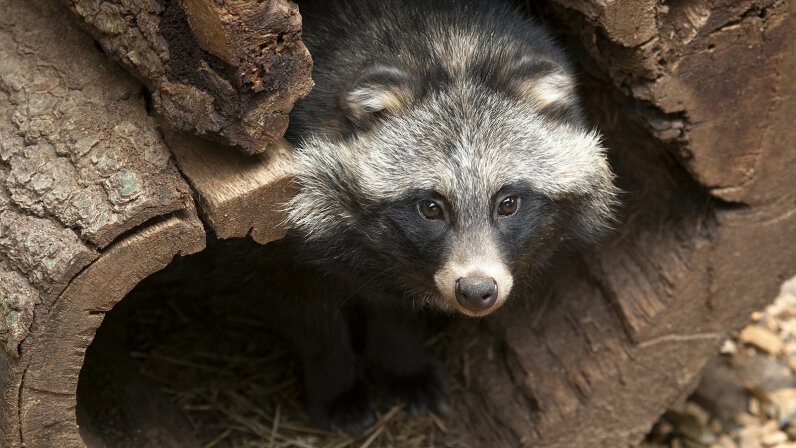 Tanuki like Loki, who lives at Zoo Atlanta, got the name "raccoon dog" because of how similar they look to raccoons. Zoo Atlanta

In June 2019, a couple in Clarborough, a small village in Nottinghamshire, Great Britain, woke at 4 a.m. to an eerie sound. They ventured out and discovered an animal they'd never seen before hissing and attacking a goat on their farm. After rescuing the goat, they took a photo of the beast and promptly posted online. The animal looked like a large, fluffy cross between a dog and a raccoon. It turns out, their unwanted visitor was a tanuki, sometimes called a "raccoon dog."

So are they raccoons or dogs? Or are they a mix of both? To learn more about these unusual critters, we talked via email to Jennifer Andrew, a member of the carnivore team at Zoo Atlanta. She helps take care of Zoo Atlanta's two tanuki, Thor and Loki (don't ya just love those names?). Zoo Atlanta is just one of two zoos in the U.S. that houses tanuki; the other is the Oklahoma City Zoo.

What Are Raccoon Dogs?

"Tanuki are dogs, genetically and morphologically speaking," says Andrew. "They get the nickname 'raccoon dog' primarily because of their similar coloring and coat pattern. The only other true similarity to raccoons is that they occupy the same niche as raccoons do in nature, even though they live on different continents."

Tanuki are 1.5 to 2 feet (0.45 to 0.9 meters) long and their tails are about 6 inches (0.15 meters) long. They weigh anywhere from 8 to 22 pounds (3.6 to 9.9 kilograms). Their fur is yellow-gray to reddish-brown, but their shoulders, legs and the tip of their tails are black. Their facial markings are similar to a raccoon's, including the black mask around the eyes.

They're originally from eastern Asia, including Japan, but due to fur farming back in the 1920s, tanuki were introduced to Northern and Eastern Europe. It's believed some tanuki managed to escape and began to live and breed in that region.

The habitat they're most comfortable living in would typically be described as forested — everything from deciduous trees to evergreens — but they can live in urban and coastal areas. They like living near water.

What Do They Eat?

When they're in the wild, tanuki aren't too picky about meals. As foragers, they'll eat anything from frogs, birds and rats to berries and carrion (dead animals). Tanuki have also been known to forage in garbage cans or pick over roadkill in areas inhabited by humans.

But zoo life is a little different. Not only are tanuki given different food to eat (including kibble, hard-boiled eggs, veggies and fish) but because they are naturally foragers in a non-foraging setting, their caregivers look for ways to make feeding time a little more challenging.

"We like to scatter their diet throughout their habitats to encourage natural foraging behaviors," Andrew says. "They also enjoy interacting with problem-solving enrichment devices that encourage behaviors such as biting, chewing, ripping/shredding, smelling, digging and dragging."

Tanuki in the wild, especially those living in harsh winter climates, enter a state called "torpor." During torpor, a tanuki can conserve energy and survive on little or no food for days or weeks.

"If weather is mild, tanuki may wake for short periods of time to forage, but otherwise, their activity level is significantly less during torpor," Andrew says. "Severity of torpor behaviors is also dependent on how well the tanuki fared during the fall when they entered hyperphagia. Hyperphagia is when an animal's appetite increases in response to an environmental or biological cue. In this case, tanuki enter hyperphagia in the late summer or early fall. They consume more food, gain weight and grow their winter coats in preparation for the winter ahead."

Andrew says tanuki living in captivity also go through torpor but the activity level and dietary needs vary depending on where they live and how harsh the weather is.

"We even see behavioral differences between individuals," Andrew adds. "Thor always seems to undergo torpor more deeply than Loki, even when winters are milder. Both Loki and Thor will usually get up once a day during torpor to check their territories and have a small bite to eat before returning to their preferred resting location, which can change from day to day."

Thor (seen here) and Loki live at Zoo Atlanta, just one of two zoos in the United States that have tanuki.
Zoo Atlanta

Tanuki Are Wild; They're Not Pets

Andrew is quick to point out that tanuki are wild animals, not fluffy, raccoon-like, semi-dogs.

"Tanuki eat a varying diet including raw meat, are naturally skittish, are very stinky, and have other needs that generally can't be met in a human household," she says. "They are also classified as an invasive species in the United States and throughout the European Union, so it would be illegal to keep one as a pet."

However, she describes Zoo Atlanta's tanuki, littermates and brothers Loki and Thor, as "fun guys to work with."

"They are mischievous and are interested in interacting with their environment and enrichment opportunities during the majority of the year," she says. "They can also be interactive with animal care team members; however, they mostly like us because we bring them food. They do tolerate care team members being in their territory; however, they do not attempt to interact with us in ways that domestic dogs would, and we respect that preference as wild animals. They will approach care team members for feedings, training sessions, or to inspect our work in their territory, but otherwise they choose not to interact with us."

Andrew says that Loki and Thor arrived at Zoo Atlanta together and lived in the same habitat for many years until recently when they began giving behavioral signs that they didn't enjoy each others' presence. They're now living in separate habitats in the zoo.

"This is normal behavior for tanuki, as generally only male/female pairs stay together long-term," she says.

Tanuki typically mate for life, forming monogamous pairs that share in foraging and in the care and feeding of their offspring (called "pups") together. The mating season occurs in spring; gestation lasts about nine weeks. The litter averages about six pups. Sadly, their lives in the wild don't usually last long, just eight to 10 years.

Tanuki are cultural icons in Japan. Images of tanuki have been used in literature, folklore, anime and advertising. One shape-shifting mythical spirit in Japanese folklore is called Bake-danuke which translates to "monster raccoon dog." It's commonly shown with a big belly and a large scrotum. This particular spirit supposedly brings good fortune and prosperity. Many Japanese businesses display statues of Bake-danuke to represent prosperity and good luck.