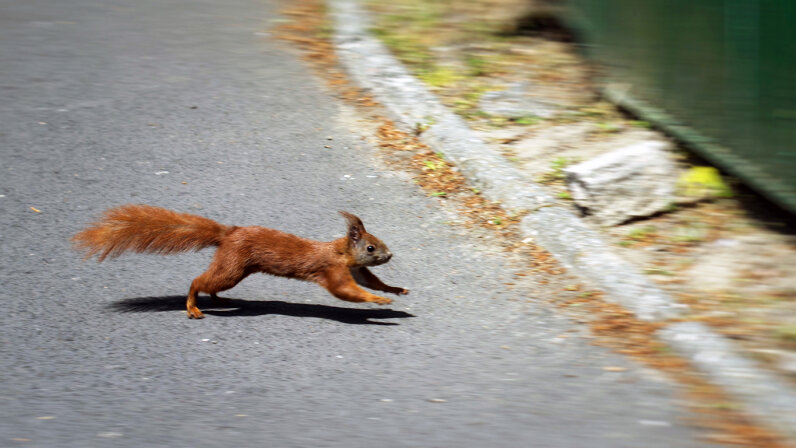 Squirrels aren't stupid. The reason they do that back-and-forth-dance in the road is more about instinct than anything else. Przemek Komon/EyeEm/Getty Images

You might be familiar with the moment: You're driving down the road — perhaps one lined with autumn's trademark crimson, gold and amber foliage — and you see an Eastern gray squirrel ahead, right in your car's path. No problem. It sees you coming and scampers away.

Or does it? As you draw near, the squirrel apparently panics and runs back into your path. Then out again, then back, then out again. And just when you think it's OK to zoom past ... so much for fall's cool colors. You're now a squirrel killer, and you are not alone.

During the fall months, squirrel roadkill is about as common as the changing colors on the trees. Part of the reason for the deadly uptick this time of year is that squirrels are simply more active as they fatten up and store nuts for the winter. Plus, young squirrels born the previous fall are out of the nest for the first time, trying to figure out their way in this crazy world. And as we know from our human experiences, young ones don't always make the smartest choices.

But more to the point: Why do squirrels engage in this odd, serpentining, running-into-the-path-of-an-oncoming-car behavior? Are they stupid? Do they have a death wish? Is car-dodging some sort of sick squirrel game? And how do you, as the driver of a car, avoid this melodrama?

Eastern gray and Eastern fox squirrels are proven to be complex thinkers, even capable of figuring out the most complicated bird feeders. And they spend most of their lives trying to not die.

The trying-to-fake-out-a-linebacker behavior we see in squirrels with cars bearing down on them is actually instinct taking over, according to Thaddeus McRae, a biologist and squirrel researcher at Lee University in Cleveland, Tennessee.

"The zig-zag run does seem to function as a way to throw off hawks swooping in for a meal," McRae says. In other words, for the 30-plus million years that tree squirrels have been around, this maneuver has helped them dodge birds of prey and other predators. It's only recently (in the last 100 years or so) that autos have entered the picture. "This zig-zag run does absolutely nothing to throw off approaching vehicles," McRae adds.

McRae cautions that this theory, while commonly held by researchers, has not been officially field tested. (One wonders what that field test would look like.)

In summary: Want to avoid running over squirrels this fall? If you see one in the road ahead, be patient. Let the squirrel do its dance. Eventually it should hop out of the way. And you can go about enjoying the season's more pleasant offerings.