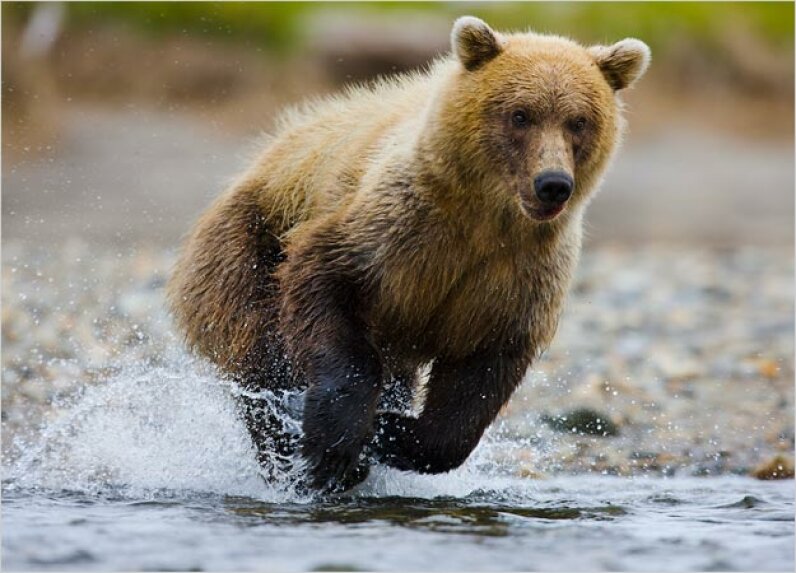 What's in a Name? Brown bears are often referred to as the bear with too many names; the brown bear, the grizzly and the Kodiak bear are all part of the brown bear species. Those living in mountains and inland are called grizzly bears; the bears found in coastal areas are brown bears; and Kodiak brown bears make their home on Alaska's Kodiak Island.

They're Everywhere: Brown bears are found living in forests and mountains in the northern part of North America, Europe and Asia. Because their home range (territory) can cover up to 1,000 square miles, the brown bears resides in the largest land areas of any of the bear species. These big bears weigh an average of 550 pounds (249 kilograms) and stand between 5 and 8 feet (1.5 and 2.4 meters) tall; the brown bears that live in coastal Alaska can easily weigh more than 1,000 pounds (453 kilograms).

Sleeping Beauty: Before the weather turns cold, the omnivorous brown bear will get ready for the winter by eating as much as 90 pounds (40 kilograms) of food each day in the late summer and fall. When winter rolls around, the brown bear sleeps through most of the season in cave dens or holes in the ground, waking up every so often only for warm weather. When spring arrives again, he's lost a significant amount of weight over the hibernation months. 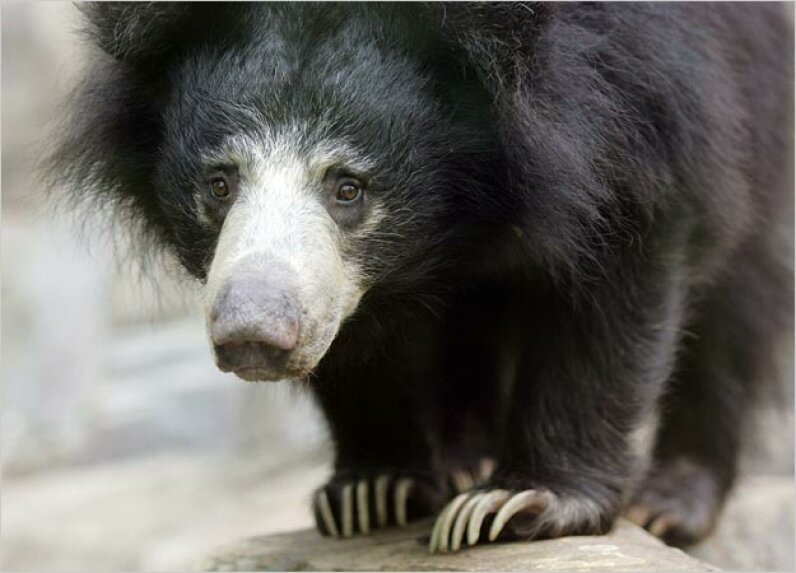 Suck Up: Termites and ants are the food of choice for the sloth bears who find their meals by using their long, curved claws to dig them out of rock-hard nests and mounds. When the bears open the hole to get to their prey, they use their lips and tongue to suck up the little creatures, which sounds a lot like a noisy vacuum cleaner.

Messy Marvin: Sloth bears won't make it onto any Hollywood best-dressed lists anytime soon, thanks to their disheveled appearance, which includes shaggy coats, white claws, and the light-colored fur around their chests and eyes. But being messy does have its advantages: Their long-haired coats prevent them from getting stung by insects.

Often Hunted: These bears live in relative seclusion while in parts of Asia like India, Nepal, Pakistan and Sri Lanka. They're often targets for poachers, who sell them to dance in circuses and other traveling shows. Because of this threat, sloth bears join the list of other threatened or endangered species in Asia, including red pandas, Asian small-clawed otters and Japanese giant salamanders. 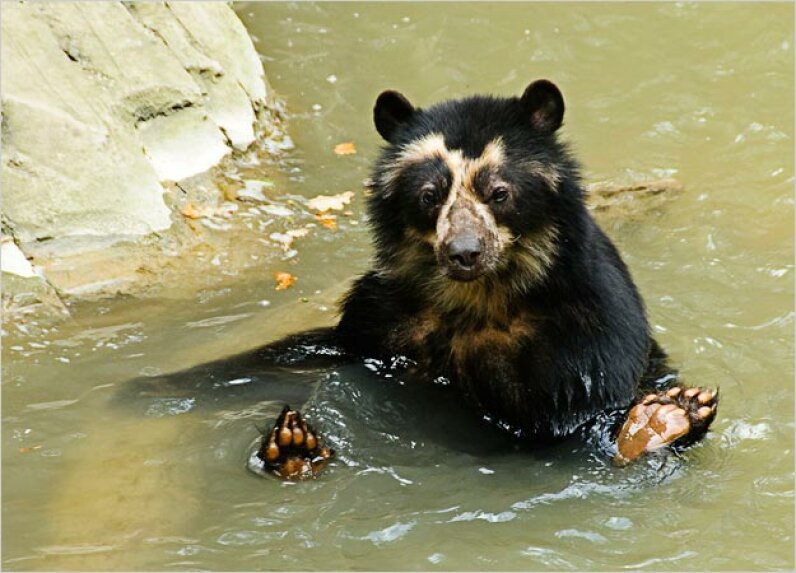 Four-Eyes: Spectacled bears, also known as Andean bears, have white and light colored rings around their eyes, which make them appear as if they're wearing permanent eyeglasses. Sometimes these white or yellowish markings can extend all the way down to the animals' necks and chests.

Hold the Meat, Please: These bears are mainly vegetarians and love to munch on fruits, berries, leaves, grass and cactus flowers. However, at times they are also known to devour insects and small animals like rabbits, mice and birds.

Not Many Left: Spectacled bears are endangered for a couple of reasons: Poachers hunt and kill them for their fur and meat, and their forest homes are being cleared away and destroyed. It's estimated that there are only 3,000 of these creatures still remaining in the wild. 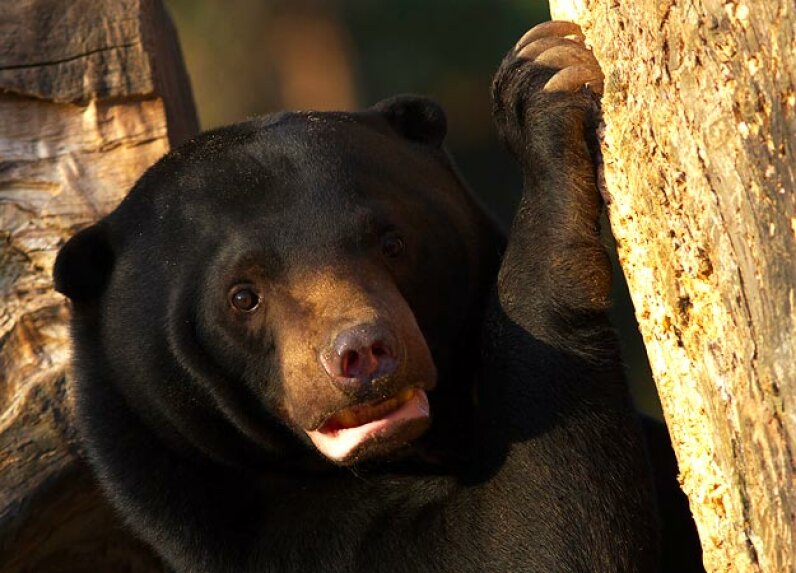 Little One: Standing an average of only 4 to 5 feet (1.2 to 1.5 meters) tall, the sun bear is the smallest bear in the world. However, while this bear may be short of stature, its long, slender tongue certainly makes up for its lack in height; the bear's tongue ranges from 8 to 10 inches (20 to 25 centimeters) long, making it perfect for extracting honey from beehives and giving this bear the nickname "honey bear."

Short Hair: The sun bear lives in the tropical rain forests of Southeast Asia, so hibernation is a foreign concept to them. Unlike other bears, sun bears' coats are short enough to prevent them from overheating, but still long enough to protect them from twigs and branches.

Teacher's Pet: People often breed or capture sun bears and turn them into domestic pets, because their size makes them easier to maintain, and they aren't as threatening as other bear species. According to the Craig Institute, these bears are sold among some cultures in Southeast Asia, where wild pets are considered a status symbol among both the rich and the poor. 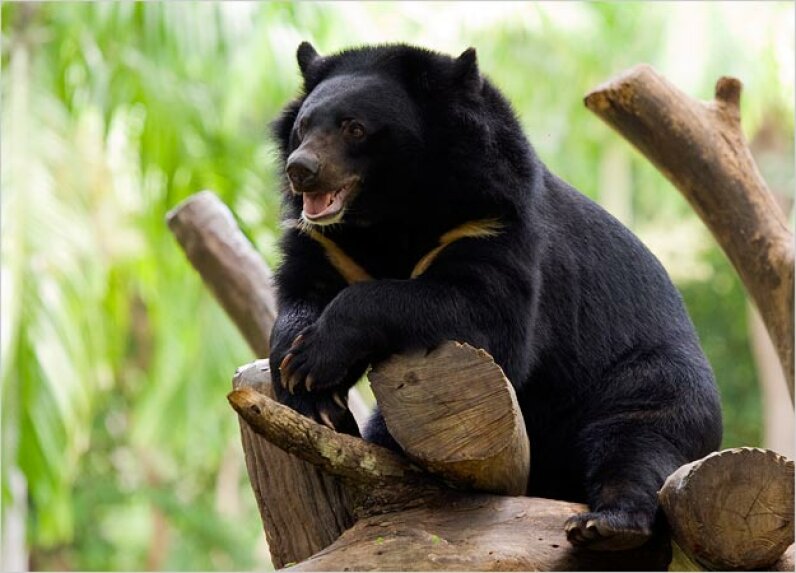 Two-Toned: Asiatic black bears are also known as "moon bears," because they each have a colored, v-shape patch of fur resembling a moon crescent across their jet black furry chests. The size and color of each of the markings vary from bear to bear, ranging in color from white to pale yellow to orange-gold.

Sleepy All Day: Nighttime is the right time for these omnivores — which maintain an average weight of about 286 pounds (129 kilograms) — to hunt for food like nuts, berries and fruits, termites, and occasionally birds and small mammals. Asiatic black bears live in Eastern Asia, where they sleep away most of the day in caves, hollow trees or rugged terrains located in dense tropical forests.

High Price for Organs: Thousands of Asiatic bears live on Chinese bear farms, where they exist in cages no bigger than their own bodies for years as bile is milked from their gallbladders on a daily basis — much to the chagrin of international animal welfare groups, who are working to stop this practice. Bile is used in traditional Chinese medicines to treat conditions such as cirrhosis of the liver, jaundice, high blood pressure, diabetes and even tooth decay.

One Time This Pony Drank a Lot of Diet Coke. Here's Why
What makes a cheetah run so fast?
Do moose really walk the streets of Alaskan cities?