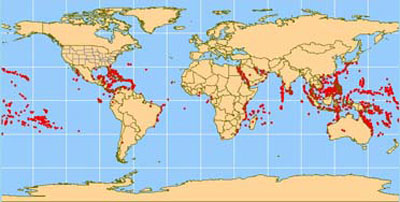 If you scuba dive in cold waters, you won't spy coral reefs. Because of their unique relationship with zooxanthellae, which require sunlight and warm water to live, coral reefs are limited in their geographic distribution to 30 degrees north or south of the equator. The reefs in the Bahamas at 32 degrees north of the equator are an exception because of the warm water currents they receive from the Gulf of Mexico.

In addition to sunlight and warm water that does not drop below 64.4 degrees Fahrenheit (18 degrees Celsius), reefs require saltwater environments with a specific salinity. As the map indicates, the majority of reefs are located in the Indian and Pacific oceans, which meet these conditions.

Lastly, reefs grow best in clear waters that are poor in nutrients. Too much suspended material floating in the water blocks the sunlight necessary for the algae's photosynthesis. Reefs can grow up to 3.9 inches (10 centimeters) per year in the following optimal conditions:

On sunny days, coral can build calcium carbonate twice as quickly as on cloudy days. Even at 3.9 inches a year though, a well-developed reef can take thousands of years to form. Reefs actually rival old-growth forests in terms of the years they represent [source: NOAA].

While corals form the backbone of reefs, the reefs are not a one-man show, and they incorporate a variety of plants and animals into their framework. Coral sand is one main player. Created by the erosive force of waves and currents against limestone and animal shells, as well as by the grinding teeth of certain fish, coral sand gets trapped in openings along the reef. Encrusting coralline algae acts like glue, depositing a hard veneer of solid calcium carbonate over the trapped sand to hold it in place. Together, the encrusting algae and coral sand patch up damaged areas of the reef and help to stabilize it, especially in areas frequently hit by waves.

Although reefs have similar needs and basic components, you can separate them into three categories, depending on where they form. Fringing reefs are the most common. They originate directly from the shore and develop on the outer edges of land masses, forming a border that projects outward to the sea. Barrier reefs are similar to fringing reefs in that they also surround land masses, but they form a border at a distance, with a span of water between them and the shore. Atolls are either circular or oval and enclose a lagoon of water. They arise when a fringing reef forms around a volcano that later retreats beneath the ocean's surface while the reef continues to grow.

On the next page, you'll learn how to identify the specific zones found in a reef as you dive past them.