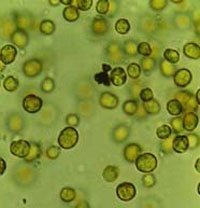 Coral reefs are vulnerable to a variety of stressors. Even a one degree rise in temperature can damage coral, causing it to expel its symbiotic algae in a process known as coral bleaching. It's called bleaching because the algae is what gives coral its color. Without it, the coral takes on a stark white appearance. If the stress is prolonged, the algae will not return, and the coral will die.

A­side from increased temperatures, several other factors can cause bleaching or other damage. Some of these threats are naturally occurring, like hurricanes and predators, while others are caused by humans, such as pollution and overfishing.

The strong massive waves from storms like hurricanes and cyclones frequently damage reefs. The waves easily break off or flatten large portions of coral reefs. Along with storms, natural weather patterns like El Nino can negatively affect corals. The increased ­temperatures, altered salinity and increased rainfall are all stressors -- lengthy periods of cold rainy weather tend to suppress coral growth.

Coral has its share of predators, too. Crabs, marine worms, snails and barnacles all prey on coral polyps, destroying even their underlying limestone structure and making it impossible for future polyps to recolonize. One of corals' most colorful fish enemies, the parrotfish, is familiar to many divers who can immediately identify it by the characteristic chomping noise it makes as it eats away at the coral.

Perhaps corals' greatest enemy, however, is humans. Not only are humans likely responsible to some extent for the rising water temperatures that cause coral bleaching, but fishing methods, pollution and even seemingly unrelated actions like deforestation harm coral.

Blast fishing, which destroys coral by ripping it apart, is used in more than 40 countries.
Steve Winter/National Geographic/Getty Images

Fishing can be problematic for several reasons. Overfishing impacts coral by removing key species from the marine food chain. The methods used to catch fish can also be devastating. Cyanide fishing, for instance, is used by more than 15 countries and involves dumping cyanide onto reefs to stun fish for easy gathering. The cyanide poisons not only the fish but also the reef. Some fishermen also engage in blast fishing, or using explosives to stun fish. The explosions rip corals apart and cause nearby colonies to bleach. More than 40 countries allow blasting [source: NOAA]

In addition, sediment runoff from farms, construction and deforestation can kill corals by clogging their mouths or by blocking sunlight. Likewise, pollutants and sewage entering the water increase the nutrients on which harmful algae and other coral competitors thrive, and increased competitors means less space for coral. Mining operations that scrape away at the reefs for limestone to use in road and building materials are bad news, too. Even well-meaning tourists and scuba divers may threaten reefs by taking "souvenirs" home with them or by inadvertently kicking the fragile reef with a fin.

Fortunately, many groups are coming to the reefs' rescue by stepping up research and conservation efforts. More reefs are being designated as marine protection areas, some countries are enforcing stricter fishing oversight and some environmental organizations even give you the option of "adopting" a reef.

Coral reefs are worth saving for a number of reasons. Their amazing beauty and diversity are only two of these. To learn more about coral reefs, dive into the links on the following page.