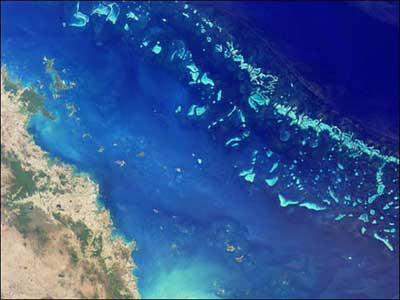 The Great Barrier Reef can be seen from outer space in this satellite photo. You can see the diagonal lines of the reef along the right-hand side of the picture.
Photo courtesy NASA

The world's single largest living structure, the Great Barrier Reef (GBR), can even be seen from outer space. The reef, at 1,429 miles (2,300 kilometers) long, is actually not one single reef but about 3,000 individual reefs. If anyone ever tells you that he has dived the entire GBR, he's lying. Since each reef has an average of about 6 miles (9.6 kilometers) of reef edge, it would take more than one lifetime to fully explore the resulting 18,642 miles (30,000 kilometers) of dive sites. Tack on another one or two lifetimes for the additional 250,000 square miles (650,000 square kilometers) of sea floor between the reefs.

The GBR is one of the seven wonders of the natural world and a highly sought after dive spot. With more than 400 coral species, 2,000 fish species, 4,000 mollusks and six of the world's seven species of sea turtles, it's easy to see why. Pick any one of the system's individual reefs and you will find more species of coral on it than in the entire tropical Atlantic Ocean [source: Sammon]. With all the forms of marine life found along the different reefs, you could dive the same spot over and over again and still not see everything. Flame angelfish, giant moray eels, hammerhead sharks, staghorn corals -- this is just a sample of some of the things you might glimpse when you duck your head underwater.

The Great Barrier Reef stretches along the northeast coast of Australia in the Coral Sea. The Australians designated it a marine park in 1975 after a public outcry about proposed oil drilling along the reef. Six years later the reef made the World Heritage List as a region of outstanding beauty and natural importance. Management of the huge reef is done by dividing it into zones. Only 1 percent of the refuge is off-limits to everything but research. The rest of the park is divided into national park zones, which are geared toward education and recreation, and general use zones, which allow activities such as commercial fishing.

Although it has seen its share of deterioration over the years, as a marine park, the Great Barrier Reef is relatively well protected. Other reefs, however, are not so lucky. Together, natural and human causes have damaged 10 percent of the world's reefs beyond recovery, and 30 percent may die in the next 10 to 20 years [source: NOAA]. In the Philippines, one of the world's 25 biodiversity hotspots, 70 percent have been destroyed and only 5 percent are in good condition [source: TAMU]. Continue reading to find out some of the causes of this widespread destruction.