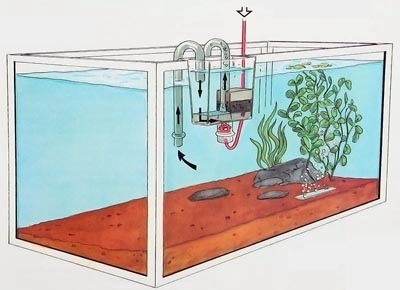 In many ways, filtration is the most complicated aspect of fishkeeping.
©2007 Publications International, Ltd.

In newly set up tanks, the effects of these compounds can kill fish very quickly. In aquariums that have been running longer but are overstocked with fish, there can be constant low levels of these compounds in the water. This creates chronic, long-term physical stress, resulting in diseased and dying fish.

Ammonia, a nitrogen-based compound, is extremely toxic. In an aquarium, it can build up quickly and threaten all the fish in the tank.

Nature, as usual, has a solution to the problem. A species of bacteria known as Nitrosomonas will actually consume ammonia, as long as there is enough dissolved oxygen in the water to support the bacteria.

Nitrosomonas bacteria are everywhere, so you don't even need to add them to the aquarium; they will grow there naturally. However, it takes them a while to multiply to a population size capable of consuming all the ammonia in the water.

As the Nitrosomonas consume the ammonia, they convert it to nitrite. Nitrite is also toxic to fish and in the long run tends to be a larger problem than ammonia.

Another species of bacteria, Nitrobacter, will consume the nitrite and convert it to nitrate, a relatively harmless compound that can be used up by plants and algae.

As with Nitrosomonas bacteria, it takes some time before the Nitrobacter are able to multiply to sufficient numbers to handle all of the nitrite. Unfortunately, until the Nitrosomonas are able to increase to numbers sufficient to control the ammonia in a new aquarium, the high ammonia levels inhibit the growth of Nitrobacter, thus allowing the nitrite levels to increase quickly and remain high.

While it may take a week or less for the population of ammonia-consuming Nitrosomonas to grow to sufficient numbers, the delay in Nitrobacter growth means it can be six weeks or more before nitrite is under control.

This process of starting the nitrogen cycle, which generally takes a total of six to eight weeks, is known as "breaking in the tank." If there are too many fish in the tank during this process, and not enough water changes are made, many of the fish will die.

This situation is known as "new tank syndrome." It's also the reason so many new hobbyists are unable to keep their fish alive and healthy.

Some aquarists report that they successfully break in their tanks using fish, but add a one-step water conditioner that neutralizes the toxic ammonia. The neutralized ammonia can still be consumed by the Nitrosomonas bacteria so they can multiply, but it will pose no danger to the fish.

However, the Nitrosomonas bacteria will still produce nitrite, and the fish will have to battle the increasing concentrations of that chemical until the Nitrobacter colony is established.

The end product of the nitrogen cycle -- nitrate -- will not harm fish unless it reaches rather high levels. Because nitrate can be used by plants as food, live plants will help control nitrate levels. Without aquatic plants, however, the nitrate will be used as food by simpler plants -- algae.

One way of controlling problems with excess algae is to lower the nitrate level by making partial water changes, which should be a normal part of aquarium maintenance anyway.

Check out the next section to learn about aeration and surface agitation.