What Are Those Microchips That People Put in Their Dogs? 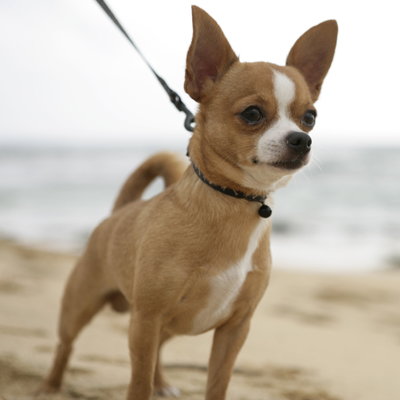 What if your Chihuahua got off its leash? You'd be glad you had a microchip, that's what. See more pictures of dogs.
Dex Image/Getty Images

For many years, because collar tags are so easily lost or removed, pet owners and breeders have relied on tattoos as a more permanent form of pet identification. Unfortunately, the use of tattoos is not an unerring method. Say, for example, your dog has gotten lost. Someone finds him and takes him to the animal shelter. Upon his arrival he is unsettled and possibly frightened. The shelter aide quickly notes the gnarled metal ring dangling from his collar where his I.D. tag used to rest. As she attempts to check your dog for a tattoo, he snarls and squirms. His hair is matted and the aide does not see the small series of numbers located near his right hind leg. This is not an uncommon scenario, so people have been trying to find other systems of identification. Microchips are one of the latest and most popular systems.

Similar to bar codes and magnetic stripes, microchips are a form of automatic identification technology. Generally, these microchips are used to store and transmit information that is specifically related to something or someone. They can be implanted, either by injection or a surgical procedure, temporarily inserted or simply attached to an object. Because they use radio-frequency signals to relay the stored information, they are referred to as radio-frequency identification (RFID).

According to the two main manufacturers, AVID and Destron Fearing, microchips used in pet identification and recovery are programmed to store a unique, permanent identification number. The chip and an antenna are sealed in an airtight, biocompatible capsule made of glass. The entire mechanism can range in size from less than half an inch to a little over an inch in length. The average microchip is about the size of a grain of rice. The device itself contains no battery, and its electronic circuitry is only activated when it is being scanned.

The method of implanting the microchip is very much like administering a vaccination. A sterile applicator is used to inject the microchip just under the skin at the back of the dog's neck, between the shoulder blades. To avoid migration (movement from the original implant site), one company uses a patented sheath to promote bonding between fibrous tissue and the microchip capsule.

Once the microchip is successfully implanted, it can be "read" using a scanning device. The scanner emits a low-frequency radio signal, activating the microchip. The microchip then sends the unique identification number back to the scanner. After the information is encoded, the scanner displays the number on its LCD display. The number is then entered into a database, along with the proper contact information. Programs like the American Kennel Club (AKC) Companion Animal Recovery (CAR) program maintain worldwide databases so they can help reunite lost pets with their families. According to the AKC CAR, more than 900,000 pets and companion animals have been registered in its database, which does include tattooed animals, and almost 50,000 pets have been reunited with their families.

The Lowdown on the Lion-like Leonberger
Dogs Love Rolling in Stinky Stuff
What Should We Be Feeding Our Dogs?