How to Care for a Dog

One of the most enjoyable parts of dog ownership is giving your pooch a special name. But once you've done that, you also need to take steps to give your dog proper identification, in case he's lost. Here are extensive details on naming and identifying your dog.

What's in a Name?

One of the most important ways you communicate with your dog is through her name. When your dog hears her name, she should jump to attention, ready for good times -- even if it's just mealtime. Choosing the right name is a special part of dog ownership, so consider your choices carefully. Here are some things to consider to get you on the right track.

Your dog's looks. Spot, Blaze, Tiny, or Blackie are all tried and true dog names. The upside is they're descriptive, making it easier to identify your dog if she gets lost. The downside is there are a lot of other dogs with those names. You might want to be more creative so your dog stands out from the crowd. A tall, leggy dog with a brindle coat -- a Greyhound, for instance -- might be named Savanna or Tiger, after the flat grasslands of Africa that might have produced an animal with this striped coat pattern.

Your dog's heritage. Investigating breed history is a great way to find the perfect name. A Scottish breed, such as a West Highland White Terrier, Scottish Terrier, or Cairn Terrier, might be named Murray or Stuart. Safari is a suitable moniker for a Basenji, the barkless breed from Africa. Tundra is a favorite name for Northern breeds like Alaskan Malamutes and Samoyeds.

Your dog's breed. Beagles, Bloodhounds, and Basset Hounds will follow their noses to the ends of the earth. Sniffer is a good name for one of these dogs, as is Sherlock or Gypsy. Lots of terriers are named Digger, and it's easy to see why. These dogs were once bred to go after varmints that lived in underground dens, hence their tendency today to excavate their yards.

Your pup's special traits. Why did you get your pup? If the two of you will be hunting or fishing together, you might go with the name Pal or Amigo. Border Collies are said to be the smartest of all breeds, so consider giving yours a name to match her intellect: Einstein or Newton, for instance.

Your puppy's registered name. Breeders often give litters a theme or names beginning with the same letter. A litter with a country music theme might have pups named Nashville's Yoakam, Nashville's Dolly, Nashville's Reba, and Nashville's Waylon. Registered names may include the kennel name or the names of the sire and dam. Thus you might have Cloverhill's Indian Summer, Craigwood Higgins of Switchbark, or Magnolia's Prince of Thieves. Although these names appear on the dog's registration papers, they obviously aren't good choices to use around the house. The breeder or owner gives the dog a nickname, or call name. Craigwood Higgins of Switchbark probably goes by Woody to his friends.

Your hobbies and special interests. If you're a sports fan, you have lots of great names to choose from, whether your game is golf, tennis, basketball, football, track and field, or hockey. You might name a fleet-footed Greyhound or Whippet Carl, Jesse, or FloJo. Naming a Boxer is almost too easy: How about Frazier, Ali, or Sugar Ray?

Your favorite books, movies, or television shows. Lots of dogs are named Lassie in honor of the Collie of literary, film, and television fame. But you don't have to name your pet after another dog in a movie or TV show. Pick the name of any one of your favorite characters for your dog.

Helpful hints. Avoid names that rhyme with the word no, such as Mo, Snow, or Beau. You don't want to confuse your pup when you're training her. Avoid long or difficult names. Worcestershire may look impressive, but by the time you get it out of your mouth, your dog's attention will have long since shifted elsewhere. Finally, make sure the name is one you won't be embarrassed to call out in front of the neighbors.

Now let's move to the everyday chores involved with dog care. We'll explain how to make them beneficial and enjoyable for you and your pet. It's in the next section. 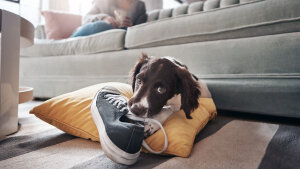