Dealing With Cats That Bite and Scratch 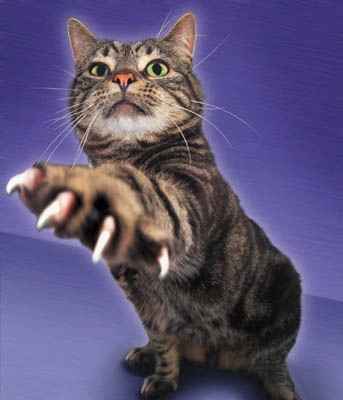 ©2006 Publications International, Ltd. A cat that scratches spontaneously or without provocation could be the sign of a disorder or disease.

You're walking down the hallway in your home, minding your own business, when suddenly your cat flings herself at your ankle, sinking in her teeth and claws, then dashes away. Is it an aggressive attack? An expression of jealousy? Possibly, but it might be neither.

A cat who bites or scratches when in pain, frightened, or being forced to do something she doesn't want to do doesn't have a behavior problem; she's acting like a normal cat. Problem biting and scratching is usually either a learned habit or miscommunication, both of which can be corrected over time.

Sometimes, however, sudden unprovoked biting or scratching can be the result of a nervous system disorder or a serious disease. (Note: Any bite or scratch you get from a cat who does not have a current rabies vaccination should prompt a call to your own doctor; always assume cats have not had rabies shots unless they have a current rabies tag or registration.)

Who taught her the trick? Many kittens learn to use human limbs as toys, climbers, and scratching posts. Many owners are surprised to learn that they are the ones who taught their young cats these bad habits.

Defensive biting and scratching. Teeth and nails are a cat's primary weapons. If other warnings don't work, cats will bite and scratch to protect themselves. Pay attention to your cat's vocal and body language; she'll usually let you know when she's on the brink of defensive biting or scratching. You don't have to show a cat who's boss by forcing the issue once she's warned you. The best approach is to back off whatever it is she doesn't like or use a safe method of restraint, if it's something that must be done. Likewise, look for warning signals when a cat is aggressive with other cats. If your cat is warning another cat that she's ready to bite or scratch, do not try to touch or restrain either of them. The cats have their attention focused on each other, and the "fight or flight" response is in full readiness. Your touch can actually trigger a fight. Instead, try to distract both cats by stamping your foot, clapping your hands, and shouting "No!" in a sharp, loud tone.

Unprovoked aggression. Sudden, unprovoked, and vicious attacks are especially scary. This is not just a cat swatting at your ankles and perhaps causing a little scratch or running your hose. This is send-someone-to-the-emergency-room kind of stuff.

Sometimes, serious biting and scratching is the result of miscommunication: Something startles the cat, and she has the impression that the person or pet nearest her is responsible. Other times, however, there really is something physically wrong with the cat that causes her to actually attack without cause or warning.

If your cat's bites and swats rarely break the skin, they're probably "inhibited" play bites and scratches. A cat who launches a serious attack (with multiple or deep bites, for example) should be carefully examined by a veterinarian.

If your cat is launching serious attacks, especially without warning or provocation, get her in for a thorough veterinary exam as soon as possible. Cats often know when there's something going wrong with them but can't put it into words. The aggression might be a reaction to pain, a hormonal change, or the sign of a problem with her nervous system.

While cats are known for being finicky, that does mean you have to tolerate this behavior. Learn how to teach your cat to eat the food you put in front of her in the next section.