Dealing With Cats That Have Litter Box Accidents 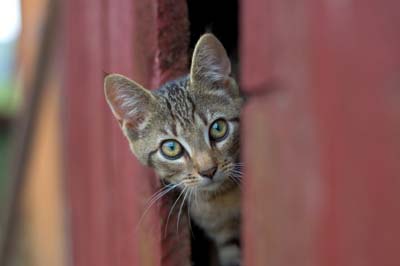 ©2006 Publications International, Ltd. Multiple litter boxes might be the solution for a cat that is having trouble eliminating.

Of all cat behavior problems, these are the ones owners complain about the most -- and with good reason. Besides the mess and damage, inappropriate elimination is unsanitary and creates an unpleasant (and often malodorous) atmosphere in the home.

Cats have an instinct to dig in loose materials and bury their urine and feces, and many of them adapt this instinct to the litter box with few problems. But it's still something they have to learn, and they often need help to get the lesson right.

Boxes, boxes everywhere. Litter boxes and litter should be the first things you buy when you decide to get a cat. Get them set up before the cat sets a single paw in your home. Make sure they are clean, easy to find, and numerous enough.

Many cats dislike using a box that another cat has recently used (even if that other cat is herself), so the rule of thumb is: The number of litter boxes in the house should equal the number of cats in the house plus one. Thus, if you have two cats, you should have at least three litter boxes; even households with just one cat should have at least two boxes.

Keep it simple. Deodorizing litters, antibacterial litters, high-tech litters -- all of these gimmicks used to sell various kinds of cat box fillers are aimed at the creatures that buy the litter, not necessarily the ones that use it. There's nothing wrong with using a litter that makes your job of tending to the litter box a little easier or a little less unpleasant, but some cats may be put off by the additives, perfumes, and chemical deodorizers used in some of these products. And that means they'll choose to do their business elsewhere. A plain cat box clumping litter (unscented) usually works fine.

Stop the madness. Once a cat starts eliminating outside of the litter box, do not assume she'll learn to use the box on her own. Cats habitually return to the same places to eliminate, a habit that's re-inforced by the lingering odor of urine or feces. Since a cat's sense of smell is far superior to ours, cleaning up a litter box accident so that you can no longer detect the odor may not be enough to deter the cat from doing it again.

Enzyme-based pet odor neutralizers actually break down the chemical structure of urine and feces residue so that your cat can no longer smell it. Pet supply stores usually carry at least one or two brands.

Block the favorite spots. Deny your cat access to places where she's eliminated outside the litter box. Physical barriers work well, but if that's not possible, try covering the spots with tinfoil or double-sided tape. This provides a barrier to the odor and a texture the cat won't want to walk on. If possible, consider placing a litter box directly on top of the inappropriate spot, and then gradually move the box an inch or so every few days, until it's where you want it to be.

Be your cat's personal trainer. When your cat first comes home, keep her in one room with a litter box. Once she's using that box consistently, give her the run of more rooms. Usually, this is enough to lock in the habit. However, a cat who doesn't completely get the hang of the litter box -- or backslides and starts eliminating in other places -- needs some additional training.

The best method is to use a large portable dog kennel. Set the cat up in the kennel with litter and water and give her meals in there, too. When you see her use the litter box, let her out for a recess.

Keep an eye on her, and return her to her private quarters after an hour or two. The next time you see her use the litter box, let her out again. The idea is, she only gets free run of the house when she uses the litter box. This strategy can train (or retrain) a cat to use the litter box in as little as two or three weeks -- but longer isn't uncommon, either.

©2006 Publications International, Ltd. A litter box in every room could help your cat feel more comfortable.

What's the cause? A cat who suddenly begins eliminating in inappropriate places could be announcing that she doesn't feel well. You'll never make any progress on getting her to use the litter box consistently if there's a physical cause for the unwanted behavior, so get her to the vet as soon as possible.

Location, location, location. Sometimes, there's something about the location of the litter box the cat objects to. Maybe it's too far out of the way (down in a basement or up in an attic, for example) or too hard to get into or out of (especially for small kittens or elderly cats). Sometimes, air fresheners or other odors in the room will keep the cat away. Pine and citrus, for example, are pleasing smells to us but may be offensive to cats. Also, loud noises, such as a nearby stereo, may disturb your cat when she's doing her business.

Before you try to treat inappropriate elimination as a behavior problem, take your cat to the vet for a thorough exam. If your vet rules out a physical cause, you know it's probably a straight behavior problem. However, even if there is a physical problem and your vet treats it successfully, your cat still has developed the habit of eliminating someplace other than litter box; you'll still need to follow the steps for correcting the behavior problem.

A cat that eats objects around the house can be more serious that the destruction of your rubber bands or candy wrappers, she could be at risk for choking. We will learn how to keep your cat focused on the food you put out for her in the next section.