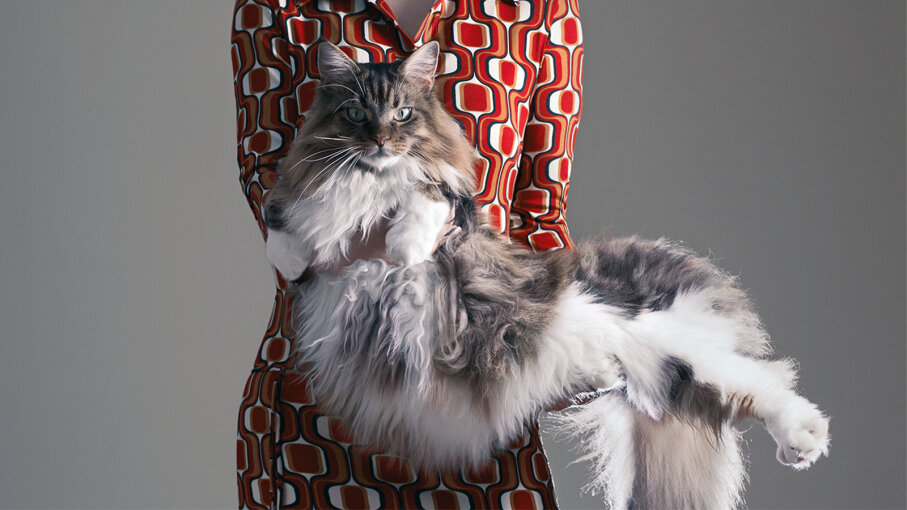 While most adult cats weigh about 7 pounds (3.12 kilograms), male Maine Coon cats can tip the scales at up to 25 pounds (11.3 kilograms). Nina Pearman/Getty Images

The Giants of the Cat World

Maine Coons are the largest of all domesticated cat breeds. They gain as much as 2 pounds (0.9 kilograms) per month during their growing cycle, which ends at about 4 years of age — more than quadruple the maturity time of other breeds. While most adult cats weigh about 7 pounds (3.12 kilograms), Maine Coon male cats tip the scales at up to 25 pounds (11.3 kilograms). Females typically weigh in at about 20 pounds (9 kilograms).

"Their nickname of 'gentle giant' is well-deserved," Sandra Cagain, owner of the Orlando Cat Café, says in an email interview. "My two cats are each 20 pounds (9 kilograms), and they are the most gentle, sweet and loving cats I have ever had. They are very well mannered and never use their claws inappropriately and will always let you pick them up and hold them — even if they would prefer not to be held."

Weight alone sets the Maine Coon apart, but this giant cat doesn't stop there. Maine Coons are some of the world's longest domesticated cats. Both male and female Maine Coons typically reach up to 40 inches (102 centimeters) in length from their noses to the tips of their bushy tails.

Although the Maine Coon is often regarded as America's first domesticated breed, its ancestry is shrouded in mystery. Advances in genetic testing could help identify the Maine Coon's ancient relatives, which may have accompanied the Vikings on their exploratory voyages.

There is one origin story, however, that may have resulted in the breed's distinctive name. Captain Charles Coon kept long-haired cats on board when he sailed from England to New England ports during the late 1700s and early 1800s. Legend has it that when Coon anchored his ship in New England ports, his cats would slip away to mate with local felines. Although it is steeped in speculation, this long-standing folk story purports that these long-haired kittens were referred to as "Coon's cats."

The Official State Cat of Maine

A Maine Coon even had a pivotal role in the Harry Potter films as Mrs. Norris, the pet cat of Argus Filch. Her claim to fame (besides starring in one of the hottest film franchises of all time) was stopping on command as she paced the halls of Hogwarts.

The Dogs of the Cat World

A cat that can be trained as if it were a dog? Welcome to the world of Maine Coons. This intelligent and eager-to-please breed exhibits dog-like tendencies and the capacity to respond well to training.

Ashleigh Ostermann adopted her Maine Coon, Maddie, from SPCA Tampa Bay in Florida when she was just a kitten. "I know cats get a bad rep of being disinterested in their pet parents, but Maddie definitely proves that wrong," she says in an email. Now Maddie is a nearly 20-pound (9-kilogram) giant with dog-like tendencies. "She lays next to me all of the time and even follows me from room to room in my apartment."

With the assistance of training techniques, like using a clicker that makes a clipped and distinct sound followed by treats, a Maine Coon's behavior can be harnessed. Some pet parents have taught their Maine Coons to sit, give high-fives or even walk on a leash.

Most cats have an aversion to getting wet, but Maine Coons will seek out opportunities to get their whiskers wet. Equipped with water-resistant fur, these felines don't mind taking a bath and will even go for a swim. Tissy, a five-year-old Maine Coon from Pennsylvania made headlines for taking laps in her family's swimming pool, something she likes to do on a regular basis during the summer months.

"Maine Coons love the water, which is a little-known fact to most peoples," says Becky Beach, owner of MomBeach.com, in an email interview. "My cat always wants to come into the bath or shower with me. She loves to get wet! It's so hilarious to watch."

Now That's Interesting
In 2004, a Maine Coon named Little Nicky became the first pet animal to be cloned commercially. After Little Nicky died at the age of 17, his Dallas-area owner paid $50,000 to have Little Nicky's DNA transplanted into an egg cell. A surrogate mother cat carried the embryo and — voilà — a kitten similar in appearance and personality to Little Nicky.