by John Perritano Jul 19, 2018
Who could resist this face? Almost nobody. So if you're tempted to slip your pooch a scrap or two, check the list and make sure it's safe. RyanJLane/Getty Images

It's dinner time and she's looking at you with those big puppy-dog eyes. Her tongue flops across her chops. Perhaps a whimper, or a muffled bark, just to let you know she's there. "Here, sweetheart," you say, sliding a bit of steak her way. "Now go lay down."

Giving your dog a bit of "human" food isn't all that bad (if it's the right food), but you have to be very careful. "There are foods that are safe for people, but are not safe for dogs," says Cailin Heinze, board-certified veterinary nutritionist and assistant professor at Cummings School of Veterinary Medicine at Tufts University.

Some foods, such as chocolate, are tasty for humans, but toxic to dogs. So are macadamia nuts and avocado. Go figure! Which foods should you not give your dogs? Here are 10 of them, in no particular order. Print this story and tack it to your refrigerator door.

No guacamole for you Fido. Avocados contain persin, which in low concentrations is OK for humans to ingest. However, even a small amount of the compound can make your dog vomit or have diarrhea. Avocado seeds can also get swallowed, stuck and obstruct your dog's stomach or intestines.

No one really knows why grapes and raisins are poisonous to dogs, yet they are. One of the most serious complications, Heinze says, is kidney failure. For some dogs, one or two raisins can be toxic. If you see your dog eat a raisin or grape, induce vomiting as soon as you can.

Heinze says most people do not know that these three foods are poison to a dog. It doesn't matter whether they are powdered, raw, cooked or dehydrated — all can kill off your dog's red blood cells and cause anemia. Eating too much can cause poisoning. That means keep your dogs out of the garden where they can scarf down these vegetables behind your back. Some people may believe garlic is good for a dog. Don't believe it, Heinze says. "There's no benefit, so why risk it?"

Often found in baked goods, cookies, muffins and trail mix, not to mention jars and pouches, macadamia nuts can make your dog vomit, weak and depressed. Why are the nuts so bad? Researchers really don't know, but even a small amount can cause poisoning. Some of the most common symptoms are, diarrhea, vomiting, tremors and fevers.

Everybody should know that dogs should not be eating chocolate in any of its forms. Although we humans devour chocolate, it contains toxic substances called methylxanthines, specifically theobromine, which are stimulants. Just a little bit of chocolate can cause diarrhea and vomiting in dogs, while too much can cause seizures, irregular heart function and even death. Keep all chocolate off the table. The level of toxicity fluctuates depending on the type of chocolate. Dry cocoa powder has a higher concentration of methylxanthines than, say, milk chocolate. Eating one M&M, however, is not going to kill your dog, but an entire milk chocolate candy bar might, especially in smaller dogs.

Raw eggs aren't necessarily toxic, but there's a chance they can cause food poisoning. Most vets frown on giving dogs raw eggs. Cooked eggs, scrambled and hard boiled, however, can be a tasty treat. The same holds for raw meat and fish. Fully cooked fish, especially salmon, is a good source of protein, good fats and amino acids.

If it would even cross your mind to give your dog an alcoholic drink, perhaps you shouldn't own a dog. Just don't do it. Not a sip of beer. No wine. Not a taste of whiskey. Not even a Jell-O shot. Alcohol impacts dogs the same way it affects humans, but it takes a lot less to cause problems. Alcohol can make a dog vomit and have diarrhea. Alcohol can also cause breathing problems, coma and even death. The smaller the dog, the worse its effects.

Black walnuts are curious foods. They don't contain a toxin as such, but a toxic mold can form on the husk, the nut and on the bark of walnut trees. The mold is a powerful neurotoxin and can cause tremors and seizures. Don't feed any horse black walnuts, either. It can cause colic and laminitis, an inflammation of the hoof.

While not necessarily a household name, xylitol is an artificial sweetener used in foods. Baked goods, some types of peanut butter, candy and gum, often contain xylitol, a sugar alcohol. In dogs, xylitol is quickly absorbed into the bloodstream, which causes the pancreas to release a lot of insulin. That can cause a rapid decrease in the level of blood sugar (hyperglycemia) and possible liver failure.

Caffeine, regardless of its instrument of delivery (read: coffee, soda, energy drinks, tea, and coffee grounds and beans) can kill your dog. Never give your dog coffee-flavored ice creams or drinks. All contain caffeine. Make sure you discard used coffee grounds and keep K-cups and bags of coffee out of your dog's each. A couple of licks of coffee that has spilled on the floor won't get your dog sick, but if they lap a cup up, it can make them hyperactive, restless and even cause them to die.

NOW THAT'S INTERESTING
If you're wondering what you should do if your dog eats something it shouldn't, give the ASPCA Animal Poison Control Center a call at this number: 888-426-4435.

The Debaucherous History of Bachelor Parties 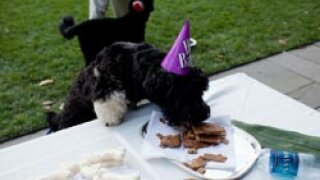 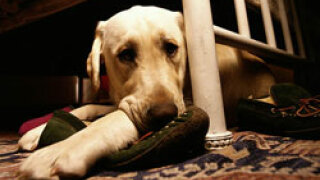 How can you tell if your dog has coccidia? 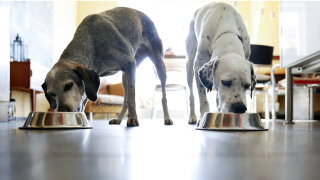