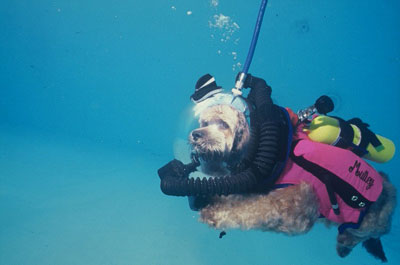 Mutley dons her cap and finds a cool remedy for the dog days of summer. See more pictures of pets.
Photo Courtesy of Gene Alba

Scuba diving is a sport enjoyed by millions of people all over the world. You strap on the oxygen tank, wetsuit, mask and fins, sink into the ocean, and you're enveloped by the silence of the deep sea. Schools of shiny reef fish dart back and forth in unison. Stingrays and jellyfish glide by, weightless and graceful. In the distance, you see something else. It's swimming with a fellow scuba diver, and it has a tank and mask of its own. It could be child, but it's too small and looks like it might actually be … furry. As you get closer, you find that it's not a child -- it's a dog. It's Mutley the dog. Mutley the scuba diving dog.

Scuba diving enthusiast and pet lover Gene Alba, of Redding, Calif., is the man responsible for this unusual canine activity. A longtime diver, Alba dreamed up a scuba setup for his shaggy mixed breed, Mutley. Alba had no previous experience building scuba equipment, but his creative thinking and 20-year dive history were all he needed to successfully design a working canine scuba system -- that and about $40,000.

The trick to completing the suit was finding the right balance between floating and sinking in water. Alba sewed built-in pockets on the sides of the wet suit that hold lead weights, which keeps Mutley from rising too high or sinking too low. Her head is outfitted in a custom-made, inverted Plexiglas bubble, which is also weighted. The same principle as a diving bell is at work here. An inverted bell, bowl or bubble holds pressurized air as long as it's kept upright -- but that also makes it harder to submerge. It takes 16 pounds of lead weights around Mutley's bubble to keep her underwater, but still buoyant. (You can learn more about buoyancy in How Scuba Works.)

Alba worked out everything in his backyard pool before taking Mutley into the ocean. After some practice, Mutley became scuba certified aboard a Caribbean cruise ship. Besides being the world's only scuba diving dog, she's also the star of the children's books Alba has written: "Mutley Goes Skiing" and "Mutley Goes Diving." To pad her resume, Mutley became the only animal to win an Emmy Award for outstanding performance for "Mac and Mutley" -- a popular San Francisco Bay Area nature show. As Alba points out, "Not even Lassie or Benji has done that."

It may seem unusual that Mutley scuba dives, but many dogs like to swim and are highly trainable, so it's not the furthest stretch of the imagination. Cats, on the other hand, aren't known to like getting wet. On the next page, we'll learn about how Hawkeye the scuba cat came into Alba's life.

Special thanks to Gene, Mutley and Hawkeye Alba for their assistance in writing this article