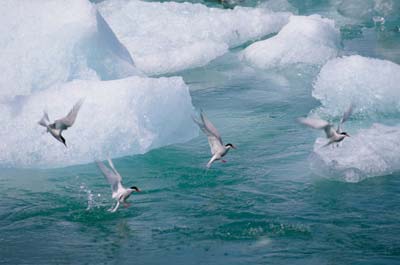 Animals, of course, don't have calendars on their walls. What tells an animal when to migrate?

Some species rely on photoperiod -- the amount of daylight in a given day. As the days get shorter, their instincts tell them winter is getting close, so they'd better head south (we'll talk about how they know which way is south later). Experiments have shown that animals exposed to constant artificial photoperiods will act is if they were experiencing those photoperiods in nature [source: Purves].

What if the animal can't see the sun, such as one that hibernates in a cave? Some animals might react to temperature. They could also be responding to internal cues, such as the amount of fat reserves stored in their bodies. Some migration patterns play a careful balancing act -- when fat reserves drop because of dwindling food supplies, it's time to head for a more bountiful wintering ground. But animals need a certain amount of fat for energy to make the journey, so they can't wait too long. Evolution has tweaked these processes so that, barring outside interference, their instincts work perfectly.

In the absence of all external stimuli, many animals still know when to migrate and when to head home. Circadian rhythms and circannual rhythms are internal calendars built into an animal's nervous system [source: Purves]. Although we don't fully understand these rhythms, they are tied to patterns of brain activity that shift with time of day, photoperiod and seasons. Humans have them too, though we don't use them to migrate.

­T­he sooty shearwater is a bird native to New Zealand, where it breeds during the southern hemisphere's summer. When the weather gets cold, sooty shearwaters head north, all the way to the North Pacific. They spend the warm northern summer living on the coasts of California, Japan and Alaska. This migratory pattern is notable because it's the longest ever confirmed by an electronic tag. A sooty shearwater's mileage for a single year's migration (up north and back) can exceed 40,000 miles. It's thought that they ride massive wind currents to ease the journey [source: National Geographic].

The arctic tern may actually have a longer migration route than the shearwater, moving from the Arctic to the Antarctic and back. It racks up about 500,000 frequent flier miles in a lifetime [source: British Trust for Ornithology].