The Evolution of Migration 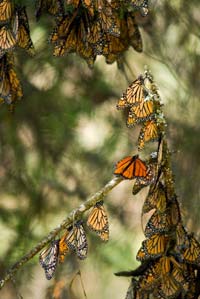 Migratory instincts developed in different species for different reasons, but for the most part they are responses to population pressure. Most migration follows the "leave somewhere cold for somewhere warm, then come back in the summer" pattern. So why would a species live somewhere that got too cold for them in the first place?

The first camp suggests that animals first lived where it was warm all year long, and they didn't need to migrate. As the population grew, resources became scarce. During warm months, northern latitudes were relatively hospitable, so some members of the species expanded their range and began living in these areas. When winter came, food grew scarce and it got too cold for them, so they temporarily relocated to warmed latitudes [source: Drickamer].

The second camp says that climate change is responsible. Species that lived in the north were able to live there all year during periods when the climate was warm enough. As tens of thousands of years passed, however, the climate gradually changed, and eventually the winters grew too cold, forcing the species to head south each year.

The truth about migration is probably a mix of the two, and it probably differs by species. However, the first theory is most likely -- population pressure is the driving force behind most migrations, and, in fact, most evolution. Climate change may have lent a hand in forming or shaping migratory patterns, but it was not the primary force.

­­Most insects hibernate during the winter months, but a few species migrate -- none so spectaculary as the monarch butterfly. As autumn nears, butterflies begin to cluster in their summer homes throughout North America. They begin heading south toward their overwinter sites in Mexico, a journey of more than 1,000 miles. There they roost by the thousands in trees. In the spring, they return home.

­The annual monarch migration is not just beautiful, it's also fascinating and mysterious. The migration itself lasts longer than a typical monarch butterfly's lifespan. The monarchs that make the trip slow down their metabolism so that they live long enough. That means that each migrating monarch will never make the trip again. In fact, two or three generation of monarchs will pass before another group migrates. Yet the offspring of each migrating monarch follows the same flight path and sometimes roosts in the same tree as its great-great-grandparents. No one is sure how they find the way, though they may be using the sun, landmarks, or scent [source: Washington NatureMapping Program].