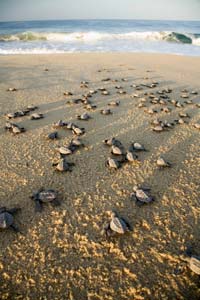 Finding the way to wintering sites thousands of miles away is easy for animals -- they just put the coordinates into their GPS systems and follow the turn-by-turn directions. No problem.

Actually, the methods animals use to navigate their migration routes are even more amazing than an animal that could program a GPS device. Some of their navigation methods are so weird we don't really understand them.

The sun - This seems pretty simple. You can judge roughly what direction you're heading in by where the sun is. But factor in the time of day, time of year and cloud cover, and you're left with a pretty tricky navigation system. Yet starlings and ants navigate this way. Some birds can even travel at night using the sun -- theories suggest they take a "reading" from where the sun sets and use that to set their course. Others think that the polarization of light coming from the sun plays a role [source: Purves].

Landmarks - This is another pretty basic navigation system. Fly toward those mountains, head to the left a little when you see the ocean, and make a nest in the first nice-looking tree you can find. Whales traveling in the Pacific Ocean near the North American west coast use this method -- their landmark is hard to miss, because it's the entire continent of North America. They keep it on their left on the way south, and to their right when they head north.

Moon and stars - Planetarium experiments have proved that many birds rely on stellar cues to figure out which way to migrate. We can even tell which star they are orienting from (Betelgeuse, in the case of indigos - [source: Purves]).

Scent - Once an animal is in the general area, scent can pinpoint specific locations. Scent won't get an animal from Saskatchewan to Mexico, but it probably helps salmon find their exact spawning ground, for instance. The scent of rain might shape wildebeest migrations.

Weather - Wind conditions are often used as supplementary navigation aid by birds. When deprived of other cues, such as the sun or stars, birds chose to fly downwind in an experiment [source: Purves]. When the birds could see the sun and stars, they flew in the right direction regardless of wind direction.

Magnetic field - The earth has a magnetic field that's usually undetectable to humans who aren't holding a compass. Some animal species do have the ability to detect the magnetic field, however, and they use it to make their migrations. Bats and sea turtles use magnetic information to find their way [source: PhysOrg]. Some species of bacteria even rely on the magnetic field to orient themselves [source: SAO/NASA].

We're not 100 percent sure how animals detect the magnetic field, but small particles of a magnetic mineral called magnetite have been found in the brains of some species. Those particles may be reacting to the magnetic field and activating nerves in such a way as to send orientation information to the animal's brain.

­­Baby loggerhead sea turtles are able to find their way along an 8,000-mile migration route the first time they ever see it. Scientists took some turtles off course, but they were able to find their way back with little difficulty. Believing that some magnetic orienteering was going on, the next experiment subjected the turtles to a variety of magnetic fields that differed from the earth's natural field. These turtles went off course. Exposure to a magnet that mimicked the earth's field set them right again -- proof that the turtles can detect the earth's magnetic field and use it to navigate [source: ScienceDaily].