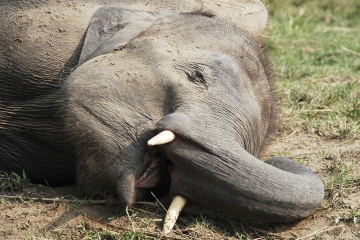 Elephants are known for their deep familial ties, but the long held belief of their special burial grounds may just be happenstance.
Jiri Foltyn/Thinkstock

Humans love a good treasure story; throughout Europe and the Americas, treasure seekers tell tales of the legendary El Dorado, or city of gold. In parts of Asia and Africa, these tales tell of a mythical elephant graveyard, where valuable ivory lies just waiting to be found. According to legend, the elephant knows when the end is near. Rather than trying to stick with the herd and potentially slowing them down, the elephant heads for the elephant graveyard. Here he can not only die in peace, but his descendants can easily locate him and visit his remains in the future.

While there's no evidence that's elephants seek out designated graveyards when they're ready to die, it is possible to find large numbers of elephant remains within a small geographic region. In the past, this concentration of elephant remains was a natural phenomenon.

Elephants follow specific migration routes, which remain the same for generations. Elephants who are injured or too old and weary to travel may settle in specific locations with easy access to water and food [source: Animal Planet]. They don't choose these locations because they are ready to die; they choose them because they pose the best chance for survival. Over time, lack of variety in the diet, injuries or old age cause these elephants to die, resulting in a relatively large concentration of carcasses within a small area [source: Young].

These so-called elephant graveyards can also result from environmental factors, like drought or poisoning. For example, the remains of many elephants can be found near Lake Rudolf in Kenya. The lake is extremely salty, and likely killed off a herd of elephants who used it as a watering hole [source: Walker]. Herds of elephants also died in close proximity to a series of poisonous lakes in East Africa [source: Carnaby].

The natural elephant graveyards of the past pale in comparison to the man-made ones found today. Poachers are killing elephants in mass numbers in order to claim their valuable ivory tusks. In 2012, poachers from Sudan transformed the Bouba Ndjida National Park in Cameroon into a tragic graveyard of sorts when they killed more than 300 elephants in a single month [source: Tanku]. A similar event occurred in Zimbabwe's Hwange National Park when poachers used cyanide to kill at least 41 elephants [source: BBC News].

So what about the myth that elephants return to these graveyards to pay their respects to long-lost loved-ones? While there's no evidence to support this idea, researchers have discovered that elephants do interact with the remains of their own kind when they come across them [source: University of Sussex]. They won't necessarily travel to visit these remains, but they might stop to give the remains some attention if they spot them during their regular routine.

Why Goldfish Make Their Own Alcohol
Can wearing magnets really repel sharks?
Changing Livestock Feed Might Help Save the Planet