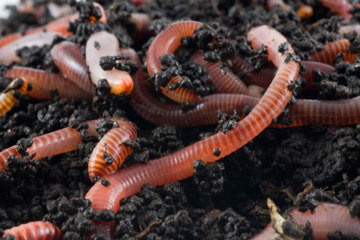 Worms are generally classified by the position in the soil they inhabit.
Hemera/Thinkstock

Earthworms typically fall into one of three categories based on where in the soil they live. If you took a spade and dug down a couple feet into soil that's covered with a top layer of dead leaves in just about any temperate woodland in North America or Europe, you'd likely encounter all three classifications of earthworms.

Around the point where the leaves sit just above ground and begin to mix with the topsoil, or litter horizon, you'll find the epigeic class of earthworms (epi means "above" and geic derives from "Gaia" or "Earth"). These worms play a big role in decomposing leaves and other organic matter that falls to the woodland floor simply by eating it. Redworms, also called manure worms, are among the comparatively small epigeic earthworms, and they're commonly sold for use in compost piles.

Beneath the soil surface, in the dark, rich topsoil layer, you'll find the endogeic class of earthworms. Endogeic earthworms generally move parallel to the surface, leaving horizontal burrows and eating organic material found only beneath the ground, like dead plant roots. As they spend their entire lives underground and out of the sun, they lack pigment and are usually pink, gray or white. Scientists know the least about the behavior and life cycle of endogeic worms.

The deep-dwelling anecic class is the most familiar types of earthworms. Their burrows are strong enough that they tend to be permanent and can reach several feet beneath the surface. They too feed on leaf litter, but anecic worms pull whole leaves down into their burrows where they feed at their leisure. In a single night, Lumbricus terrestris -- the common European earthworm, known in the U.S. as the night crawler -- can travel as far as 62 feet (19 meters) along the soil surface in search of food [source: Werner].

Earthworms are segmented, which means they belong to the phylum annelid, meaning "ringed worm" [source: Raskoff]. The 100 to 150 ringed segments that help to define earthworms are also its means of locomotion. Each ring can move as a muscle and independently from the rest of the segments, and the worms move through a process of expansion and contraction. At the front, or anterior, end of the worm are retractable bristles called setae. When extruded, the setae anchor the front end of the worm in place, which allows the worm to contract the segments in the rear, dragging them forward (they can also move backward). By extending its front, anchoring itself and then contracting the rear, the worm is able to move through the soil.