The Life and Death of the Typical Earthworm 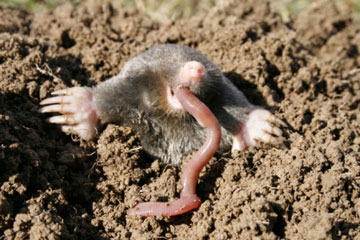 Moles are but one of the many predators that earthworms must learn to avoid. There are also plenty of parasites they have to endure as well.
iStockphoto/Thinkstock

From the time it emerges from its cocoon to the day it dies, an earthworm's life expectancy can vary widely, depending on the species. The night crawler has an average life span between six to nine years and has been reported to live up to 20 [source: Backman]. Red worms typically live between two and five years [source: Wormman.com]. Gray worms, which spend their entire lives beneath the soil surface, tend to live between 1.25 and 2.6 years on average [source: Muratake].

During these life spans, worms come to develop some preferences for food and habitats and they have a way of showing when they need perpetually moist environments, somewhere in the 50-percent to 90-percent humidity range. They are also sensitive to temperature changes aboveground, and are most active temperatures between 59 and 86 degrees Fahrenheit (15 to 30 degrees Celsius) [source: Edwards]. And while they'll eat just about any organic matter (from protozoa to leaves to animal carcasses) in just about any state of decay, earthworms also have preferences in their diets. For example, researchers found that earthworms prefer maple over oak leaves and clover over grass. In one study they left just .6 percent uneaten of the clover residue used in the experiment while 9 percent of the grass remained [sources: WSU, Bugg].

This means you can find an earthworm living anywhere it's relatively warm, moist and loaded with food -- from a forest in Wisconsin to a sewage treatment plant in Malaysia. When these conditions aren't right, earthworms can simply go dormant until things change more to their liking. In this dormant state -- called aestivation, which is similar to hibernation but is actually more efficient -- earthworms effectively stop living: They don't need food, move or reproduce. Instead they simply curl up in a ball to maintain moisture on their skin and go dormant until temperatures and other conditions improve [source: Southwest Wildlife].

Earthworms have to dodge plenty of natural predators during their lives. In addition to obvious ones, like birds and moles, they also have to look out for foxes, hedgehogs, turtles, slugs, beetles, snakes and leeches, all of which are happy to feed on them. What's more, they can serve as hosts to some of the same parasites that can infect humans, like nematodes, mites and flatworms, as well as cluster flies, which lay their eggs in earthworm burrows. When the eggs hatch, the maggots parasitically attach and feed on the earthworm [source: Tomlin].