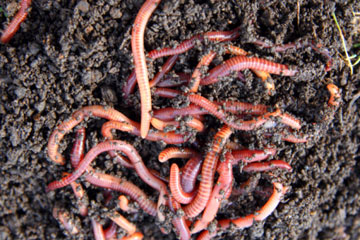 Just going about their own daily lives, earthworms provide vital benefits for local plants and animals. First and foremost, they carry out most of the decomposition of the leaves and litter that fall to the woodland floor.

Worms are eating machines. On the forest floor, redworms munch organic matter in any state of decomposition. Beneath the surface, earthworms like night crawlers eat leaves pulled into their burrows. As a worm consumes the organic matter, it breaks it down into smaller parts, releasing nutrients locked up in the leaf. The worm absorbs some, but not all, of these nutrients for itself. The castings excreted by earthworms are packed with nitrogen, a key element needed to sustain plant growth. Earthworms absorb only about 27 percent of the available nitrogen in their food, leaving the other 73 percent broken down and available as nutrients in the soil [source: Werner]. Charles Darwin calculated that 10 years' worth of worm castings from an acre of soil collected and spread evenly over that acre would form layer 2 inches (5.08 centimeters) thick [source: Conrad].

Earthworms also perform other services for its local ecosystem as well. You know how rainwater has a tendency to seep into the ground? You can thank deep-burrowing worms for that. As anecic worms like night crawlers move vertically to the ground, the mucus they produce not only helps them move more easily through dirt, it also acts as a stabilizer, kind of a slimy cement that helps maintain the structural integrity of the burrow. These burrows prevent flooding by also acting as channels for rainwater to percolate through the soil, which acts like a filter, cleaning out impurities as the water trickles down to aquifers and other reservoirs.

These same channels also aerate the soil and allow plants' roots to move into areas that would otherwise be too compacted had earthworms not already burrowed through it.

Tilling the soil is also a major service that earthworms perform. Deep burrowers move soil upward and downward, distributing nutrients more efficiently, breaking up compact soil and aerating it. Topsoil dwellers break up minerals in the soil and mix it together as well. You can kind of think of earthworms as natural earth movers or, as Aristotle put it perhaps best, "the intestines of the soil" [source: Tomlin].