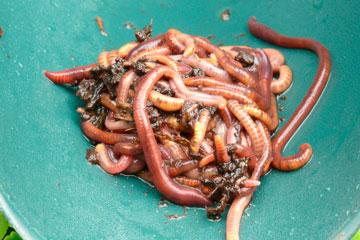 One of the most interesting aspects of earthworms is their sexuality. Earthworms are simultaneous hermaphrodites, meaning worms have both male and female reproductive organs. During sexual intercourse among earthworms, both sets of sex organs are used by both worms. If all goes well, the eggs of both of the mates become fertilized. You can imagine this is a highly efficient way of ensuring the survival of the species. Vermicomposters, people who raise worms and other organisms to compost, report that their earthworm populations typically double every 60 to 90 days [source: Werner].

To copulate, two worms line up against one another facing opposite directions. In this position, both worms excrete so much mucous, that what is called a slime tube forms around their bodies. Each worm ejaculates sperm from its sex organs into this slime tube and it is then deposited in the other worm's sperm receptacle. The act of mating is completed, but the process of reproduction still continues as each worm goes its separate way [source: Conrad].

You know the wide band near the front of any earthworm? That band is called the clitellum and it's responsible for producing another tube of mucus. This band is passed forward toward the mouth end of the worm. As it travels forward, the mucus passes over the sacs containing the worm's own eggs, which stick to the slime. Attached to the slime tube, the eggs then pass over the seminal receptacle, where the other worm's sperm is kept. The eggs and sperm come in contact in the slime tube and if all goes well, the eggs are then fertilized.

The band of slime is wriggled off the head of the worm and forms a cocoon in the shape of a lemon for the anywhere from four to 20 worm eggs that the common European earthworm typically lays. In about two to three weeks, the newborn worms will hatch and emerge from the cocoon into the soil. This cycle of reproduction can happen every week to 10 days, another reason earthworm populations can grow so quickly [source: Barrett].

Earthworms can also reproduce themselves if need be. They can regenerate new segments if they lose a few. Most earthworms are better at regenerating tails than heads, but some can. They don't reproduce asexually, however; only half (and likely the head half) of an earthworm split in two will regenerate into a full worm once again [source: Tomlin].