by Debra Ronca
NEXT PAGE 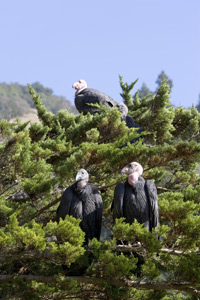 In prehistoric times, condors were abundant, with a habitat that took up significant parts of North America. Their numbers decrease­d drastically as large mammals like the mastodon and saber-tooth tiger became extinct. Condors feed almost exclusively on the carcasses of mammals (known as carrion), so the loss of these major food sources severely damaged their population.

By the time Europeans arrived to settle North America, California condors were nearly exclusive to the Pacific coast. However, the settlement of the West led to a massive decline in the condor population -- from shooting, the synthetic pesticide DDT and egg collection -- and by 1982, their number had dwindled to only 22 birds [source: NPS].

Condors live for a long time, with an average life expectancy of 60 years. It takes about six years to reach sexual maturity, and the females usually lay only a single egg about every other year. Therefore, you can see why it didn't take much to nearly eradicate the species. Fortunately, when experts took drastic measures in the mid-1980s and decided to take all remaining condors into captivity, they found that condors breed well there. They were able to trick the females into laying more than one egg simply by taking eggs away as they laid them. The eggs were then incubated, and the resulting condor chicks were fed with a puppet resembling a female condor so that the chicks wouldn't become attached to humans. In These successful efforts led to the reintroduction of the condor into the wild in 1992.

­As of December 2008, there are 327 California condors in existence. More than half of those birds live in the wild, in controlled locations of Cali­fornia, Arizona and Baja, Mexico [source: San Diego Zoo]. While it's not a huge number, that 327 represents a vast improvement from the population of a quarter-century ago [source: Defenders of Wildlife]. Although the future of the California condor isn't as dire as it once seemed, ongoing threats to the population include electrocution from power lines, choking on litter, accidental shootings, poaching and waste poisoning (antifreeze or crude oil are likely culprits).

Now you know why California condors are special. One thing we're pretty sure they're not, though, is pleasant to look at. California condors resemble vultures, feed on dead things and have no feathers on their heads. Why would a bird have a bald head? Read on to find out.