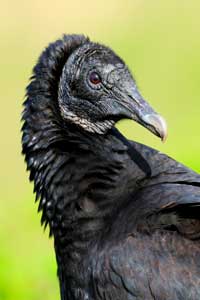 The Indian government wants its vultures back. Yes, the unattractive, carrion-feeding and generally reviled birds of prey are being bred in captivity in an effort to save the avian species. Why such fretting over the vile vulture? Vultures often feed on dead bodies of sickly animals and curb the proliferation of bacteria. If they disappear, it could open the door to a spike in diseases, including anthrax and brucellosis in livestock, which could then spread to people [source: Gross].

The population of Oriental white-backed vultures in India has dropped from tens of millions to around 11,000 as of May 2008 [source: Morrison]. Around 97 percent of two related species, the long-billed and slender-billed vultures, have also died off in India in large numbers [source: Morrison]. Scientists have identified an anti-inflammatory drug called diclofenac as the culprit. Banned from use in India in 2006, ranchers used to treat their livestock with it. If cattle given diclofenac died, and vultures fed on their carcasses, it took only one exposure to the tainted meat to kill the birds [source: Morrison].

Although they hunt down rotting carcasses of dead animals, vultures are referred to as birds of prey. They soar at altitudes thousands of feet above the ground in search of meat. New World vultures in particular have acute senses of smell to help them locate their meals. But even though they feed on nature's garbage, vultures are surprisingly sanitary birds. For instance, they have no feathers on their heads, which allows them to stay cleaner while digging into messy carnage that may contain unhealthy bacteria. Vultures also urinate on themselves to keep comfortable and disease-free. As the urine evaporates, it cools the vulture's body in the same way sweat works on humans. The acid in the urine simultaneously destroys harmful pathogens from their last dinner.

That acid inside a vulture's body can also be wielded as an effective defense mechanism.

If you find yourself in the rare situation of being able to startle a vulture, resist the temptation. When vultures feel threatened, they have a handy way of reacting: They induce vomiting. As repulsive as it seems, vultures aren't the only members of the avian family to practice defensive vomiting. Herons, gulls and terns are known to do so as well [source: Deng].

To get an idea of how unpleasant vulture vomit is, think back to the last time you ate a sandwich with a lot of onions. You probably brushed your teeth or chewed gum afterward to cleanse your breath of that sour onion stench. Now, consider how terribly your breath would smell if you ate a sandwich made of rancid meat. It would probably be gag-inducing to all who passed by.

Carrion-eating vultures take this scenario one step further when in harm's way. Their defensive vomit is foul-smelling enough to drive away predators. If enemies approach too closely, the high amount of acid in the vomit is strong enough to burn them as well. In a study on whiteback vultures, the pH levels in their stomachs were between a 1 and 2 [source: Houston and Cooper]. That measurement is comparable to gastric and hydrochloric acid from the human stomach and is far more corrosive than acid rain, which has a pH between 4 and 5. It was also more acidic than the stomach contents of other carnivorous birds, including herons and barn owls.

In addition to scaring away predators, the vulture's stomach acid also explains how it survives off its odd diet of rotting meat. Vultures will stay healthy even after eating the carcass of a sick animal. The bird's stomach acid is so powerful that it breaks down the meat quickly, before any pathogens have a chance to infect it. But the acid may not kill bacteria completely as it moves through the body. Vulture feces, for instance, have carried traces of anthrax spores from contaminated animal flesh [source: Saggese et al].

However, while most animals recoil from vulture vomit, bald eagles willingly eat it as part of their diet. They are known to scavenge from other birds' kills and will settle for vulture vomit. When vultures hatch chicks, instead of bringing food into their nests to feed them, the parents regurgitate digested carrion. In light of this, perhaps instead of being known as nature's garbage crew, vultures should carry the title of the ultimate freegans.

Now, test your animal knowledge with these quizzes!

Check out these related articles!

Not All Birds Fly South for Winter: Partial Migration Is on the Rise
Penguins: The Monogamous Tuxedoed Birds That 'Fly' Underwater
Why Birds of a Feather Mob Together