The hummingbird is to the bird world what the helicopter is to aviation. The tiny bird -- which tops out at 20 grams (less than an ounce) -- not only can fly on every axis, but also hover in midair. This incredible flying ability makes hummingbirds one of the most fascinating birds to watch. You'll catch sight of a wild hummingbird in the Americas -- anywhere from Alaska to Brazil. Some Mexican hummingbirds will migrate north for spring, flying up to 500 miles in 20 hours without a break [source: National Geographic].

Hummingbirds almost never stop moving, and they spend nearly all of their time in the air. Their legs are so small and weak, they typically can't walk at all. But in the air, they're masters. Hummingbirds beat their wings up to 80 times a second, which creates the soft humming sound that earns them their name [source: National Geographic]. Their heart can beat up to 1,300 times per minute while in flight [source: Defenders of Wildlife]. All of this lightning-fast beating takes its toll: Hummingbirds have to eat every couple of minutes. They consume enormous amounts of pollen, using a string-thin, long tongue to draw pollen out of deep flowers. As with everything else on the hummingbird, that tongue is lightning fast, carrying a load of pollen into the beak 13 times a second [source: Defenders of Wildlife].

The need to eat so much, so often, dictates much of the hummingbird's behavior. It makes the hummingbird one of the most territorial birds in the world. They'll scare off animals as large as hawks to protect their space. They'll do this by performing dramatic aerial moves that either frighten or annoy the threatening bird into flying away.

These aerial moves earn the hummingbird a unique place in the animal world. Few -- if any birds -- can match their speed and agility. They often appear to dance in the air and regularly engage in complex aerial displays, sometimes to defend their territory and sometimes to impress the opposite sex. Two hummingbirds might even bounce around in the air together.

It makes sense that hummingbirds would mate midair -- they do everything else in the air, and their legs are all but useless. They could probably pull it off, too, what with their ability to hover. But do these birds actually copulate in flight? Find out in the next section. 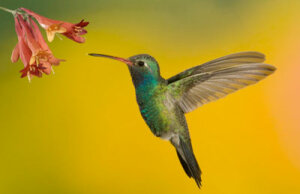 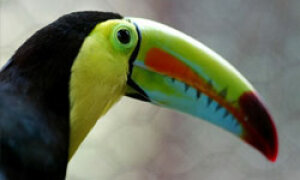