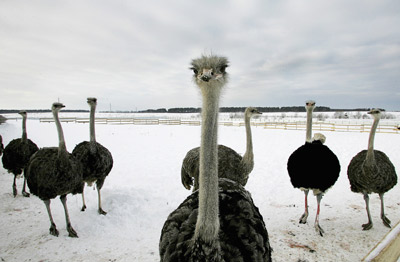 Ostriches are raised for their lean red meat. These ostriches are seen at a commercial farm.
Dima Korotayev/Pressphotos/Getty Images

Standing up to 9 feet (2.7 meters) tall with lanky legs, massive bodies, huge overbites and eyes the size of a child's fist, an ostrich looks like an avian punch line [source: San Diego Zoo]. These birds are no laughing matter, though. They're the largest birds alive, and they can kill a lion with one swift kick.

The ostrich is different from almost all other birds. They belong to a family of birds called ratites, which includes emus and rheas as well, and they are easy to tell apart from other winged creatures. For one thing, these birds can't fly.

As strange as it seems for a bird to be flightless, it makes sense if you consider flight as a way to escape predators. Ostriches don't need that particular escape route because they can sprint at up to 43 miles per hour (70 kph) and run long distances at more than 30 mph (50 kph) [source: San Diego Zoo]. They're the fastest animal on two legs. Their speed is even more impressive when you consider they can weigh up to 400 pounds (181 kg) [source: USDA]. While they don't fly, their wings aren't useless: They serve to balance the ostrich while it runs and act as rudders to quickly change direction at top speed. Male ostriches also use their huge wingspan to attract females in mating season.

Ostriches live mostly in desolate desert climates, so they have to be pretty flexible in their diet. They'll eat almost anything: plants, lizards, seeds, locusts and stones are common parts of their diet (yes, stones -- they help to crush up the other stuff they eat). One rancher has reported his ostriches swallowing tennis balls -- and a kitten [source: NWF]. On farms, ostriches' small and nonpicky appetite makes them a good investment. They grow faster than cattle on much less food. They reproduce more often than cows, and they sell for a lot more because their meat is considered a delicacy, at least in the United States. In Europe and South Africa, it's actually pretty common fare.

Why's their meat so special? For one thing, while ostrich meat is poultry, it's red, not white like most other birds. And this red meat, which looks and tastes much like beef, is lower in fat, calories and cholesterol than not only beef, but also white meats like chicken and turkey. All ratites have red meat. It has to do with their muscles. On the next page, we'll find out what meat actually is and what makes ostrich meat red instead of white.

Head in the sand?

Ostriches don’t actually bury their heads in the sand. This myth comes from a misinterpretation of a defense mechanism. If an ostrich can’t escape a predator by running, it’ll drop to the ground and lie flat. Since its head feathers are tan, like the ground, it looks from a distance like its head has disappeared underground. 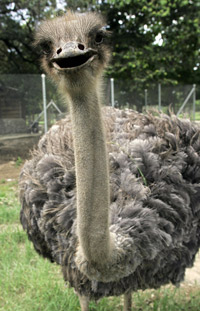 Male Cockatoos Woo Their Ladies With Impressive Drum Solos
What's the difference between a penguin and a puffin?
Only Birds Have a Syrinx and That's Why They Sing