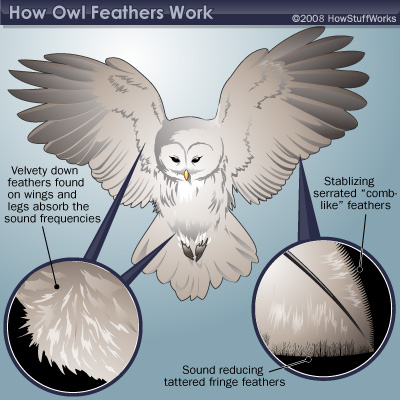 While it adds to the owl's mystique, silent flight serves a very practical purpose. It helps this nocturnal creature sneak up on its prey. But how do owls fly silently in the first place?

The design of owls' wings allows them to fly in almost absolute silence. Different parts of their wings and the characteristics of their feathers contribute to their silent flight. Owls have broad wings with large surface areas that help them to float through the air without flapping too much. Less flapping makes less noise.

The main reason owls can fly silently is the uniquely designed leading edges of their primary feathers. When most birds fly, turbulence — created when air gushes over the surface of their wings — causes noise. Owls' wings, however, are unique because they reduce noise caused by turbulence.

An owl's primary feathers are serrated like a comb. This design breaks down turbulence into smaller currents called micro-turbulences. Then the edge of the feather muffles the sound of air flowing over the wing and shifts the angle at which air flows. These soft feathers allow air to pass through which eliminates sound. Some people suspect that, as the owls flies, these feathers may also shift sound energy created by the owl's wing to a higher frequency that prey can't hear.

Owls' secondary feathers are made up of soft fringes that reduce turbulence behind their wings. The trailing feathers on the back end of the wing are tattered, and the rest of the wing and the legs are covered in downy feathers. As the owl flies, the trailing fringe and tattered feathers break sound waves over the wings as air flows over them. The down feathers absorb any remaining noise created in flight. The down absorbs frequencies above 2,000 hertz — the measure of frequency — which eliminates all sounds that owls' potential prey can hear [source: Roach].

So, the secret's in the wings. But does this noise-reducing design have a place in your next airplane flight?

Was That a Double-take?

Some species of owls can rotate their heads 270 degrees. Owls have extra vertebrae in the neck that allows for this rotation. Since the owl's eyes are fixed, rotating its head comes in pretty darn handy for hunting. The combination of silent flight and head rotation packs a mean punch to anything on the next rung on the food chain.