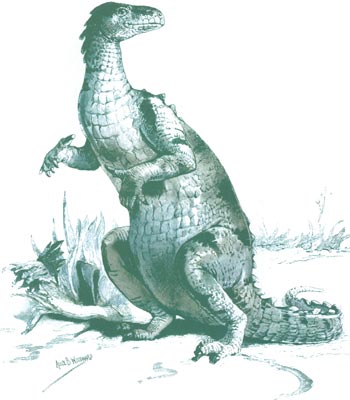 When Sir Richard Owen coined the term Dinosauria in 1841, be included only three animals: Megalosaurus, Hylaeosaurus, and Iguanodon. Iguanodon was first known only from several teeth, which were found by Mary Ann Mantell in England. The animal was later described and named by her husband Dr. Gideon Mantell in 1825. It got its name, "iguana tooth," because its tooth looked like the teeth of an iguana. Later (in the 1870s), many complete skeletons of adults and younger animals were found. From all this material, we know a great deal about the behavior, anatomy, and evolution of this important dinosaur.

Iguanodon was a large ornithopod. It walked on its stocky back legs, but the largest animals often walked on all four legs. The front legs were strongly built and the hands specially constructed. Like the toes of the back feet, the fingers had blunt hooves, much like those of today's cows and horses. The outer finger was small and could have been used to grasp, much like our thumb. The large Iguanodon thumb, however, was sharp and like a spike. Scientists are not sure what this spiked thumb was for. It may have been used during spar ring matches, perhaps between rival males competing for females, territory, or resources, or it may also have been used as a weapon.

As in other ornithopods, the front half of the body was balanced by the long, rigid tail, reinforced by bony tendons. This balance was needed when the animal walked on its back legs. Also, the bony tendons kept the tail from dragging on the ground.

Groups of nearly complete Iguanodon skeletons jumbled into piles have been found in Belgium and Germany. These groups of animals may be the remains of small herds of Iguanodon caught by a flash flood or while trying to cross a flooded river.

Although Iguanodon has been found in many places in Europe, the newest member of the genus was discovered in South Dakota. This species is probably the most primitive.

Iguanodon is the best-known member of the family Iguanodontidae. Another member is Ouranosaurus, from Niger in western Africa. A possible relative was Craspedodon, known only from three teeth from the Late Cretaceous of Belgium. 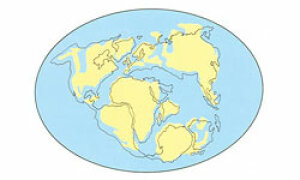 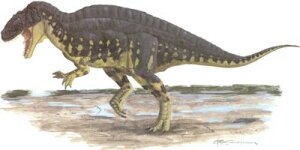 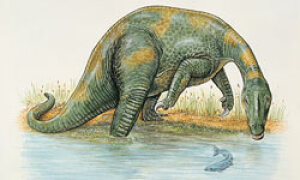