Habitat of the Giant Oarfish

Giant oarfish mostly live in depths of 600 to 3,000 feet (183 to 914 meters). However, it's believed that they probably make their way up to a much higher ocean depth at times [source: Whittaker]. Mostly, these big ones spend a good deal of their time in the ocean's twilight zone: depths with very little sunlight, lots of pressure and the first flickerings of the bioluminescent animals of the sea.

At this point, you already know that giant oarfish are, um, gigantic. Not only would you think nobody wants to mess with it, but you'd be surprised if the the fish had much trouble finding food. Not too many creatures could keep its sharp teeth at bay, right?

Well, not so much. Turns out that the fierce-looking giant oarfish doesn't have any teeth. In fact, our fearsome king of the herrings has little interest in wresting huge prey or chowing down on fish friends. Or you. While old-time sailors scared themselves silly by confusing oarfish with the terrifying sea monsters of myth, they were actually observing a gigantic fish that eats a steady diet of plankton. (They also might throw down little crustaceans and a small squid or two, for good measure.) The bottom line? If you happen to spot a giant oarfish while you're lazily swimming in the ocean, do not fear he or she will take a bite of you. Do, however, fear that you're probably swimming really, really far out -- not to mention deeper than is safe -- and you're probably wrestling with deeper issues, anyway.

Which does bring us to where you could technically catch up with a giant oarfish in the wild. While we used to think they were pretty rare, we're now seeing them caught more often in nets and the like, as well as hearing reports of them washing up on beaches. The actual range of the giant oarfish is pretty wide. They're known to be in the Atlantic (and the Mediterranean Sea), as well as the Indian Ocean. They're also in the eastern Pacific, from southern California down to Chile.

You might think a fish weighing hundreds of pounds would be a great source of protein, but you'll be disappointed to know that oarfish are pretty universally acknowledged as bad eating. Not only do they lack any distinctive taste, but their flesh actually resembles an unappetizing, gelatinous goo [sources: Carstens, Howard]. Bon appetit! 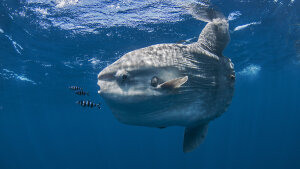 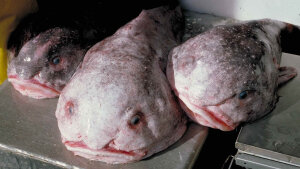 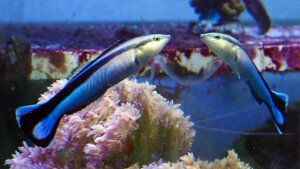