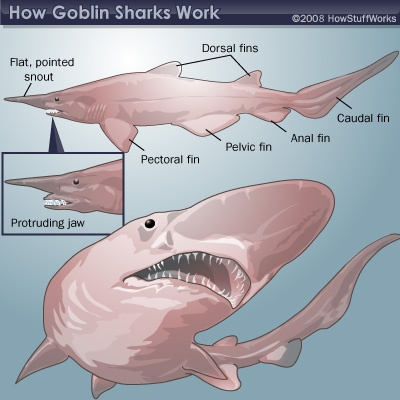 A comparison between the current incarnation and fossils also revealed that little about the fish has changed over time [source: Carwadine]. Despite its ugliness, the goblin shark's body structure seems to have been perfected for survival.

In spite of the goblin shark's large size, it can sneak up on prey effectively thanks to its liver (of all things). In relation to body size, the goblin shark's oily liver takes up enough room on its insides to make it almost as dense as water [source: Ebert]. Since it floats so easily, the fish requires little movement to get around, and it can discretely float up to its desired food source.

The last goblin shark sighting occurred in 2007 in Tokyo Bay, Japan [source: Mehta]. After one day in captivity, the living fossil fish died. Since opportunities like that one are few and far between, it may be a long time before we decode all the mysteries of the goblin shark. For more shark-related information, visit the links below.