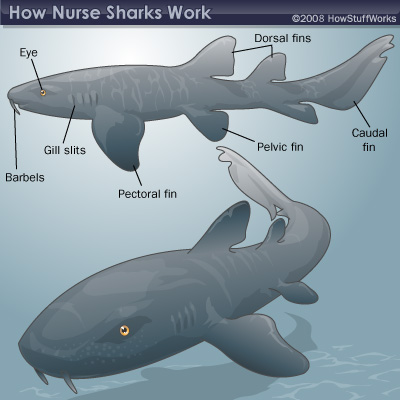 Anatomy of a nurse shark
HowStuffWorks

Any shark looks huge when you're not expecting to meet one, even the more modestly sized nurse shark. While some claim to have seen nurse sharks up to 14 feet (4.3 meters) long, marine biologists who have actually put a measuring tape against the species cite more conservative lengths [source: Castro]. What scientists do agree on is that the female is always slightly larger than the male of the species. A more realistic estimate puts female nurse sharks anywhere from just over 7 feet to just under 9 feet (2.2 to 2.7 meters) [sources: Guarracino, National Aquarium]. The males are generally about one-third of a foot shorter [source: Guarracino].

The nurse shark can be many different colors, from yellowish tan to dark brown, although most fall closer to the dark brown side of the spectrum. Juvenile nurse sharks sometimes have additional pigmentation in the form of small black spots and bands.

Let's take a look at the nurse shark's fins. Instead of the pointy dorsal fins that we might see in movies when sharks swim near their prey, nurse sharks have rounded dorsal fins on their back, the first one bigger than the second. Nurse sharks have extremely long caudal fins, or tails; the caudal fin makes up more than 25 percent of the shark's entire length [source: Guarracino]. The bottom fin, the pectoral fin, helps the nurse shark to hover, and sometimes even to "walk" along the ocean floor. This hovering motion sometimes proves useful to nurse sharks looking for a bite to eat; we'll discuss nurse shark prey in a later section.

The nurse shark has a few other anatomical features that help with eating, including a pharynx, which is a muscular cavity that can suck in food like a vacuum. You might also notice barbels, or whiskers, on the nurse shark's snout; these help the nurse shark sense nearby food.

Because they rely on sucking in food, nurse sharks have a small mouth and fairly simple teeth. The small mouth limits the size of the prey that's available to the nurse shark, and the teeth are barely used in feeding because of the shark's ability to draw food in with the pharynx. The teeth are small and non-serrated, which means they're not ideal for cutting or tearing into their prey's flesh [source: Matott, Motta, Hueter]. That's not to say that the nurse shark's bite isn't strong -- surgical instruments are sometimes required to extricate a human who is in the grasp of a nurse shark's bite [source: Guarracino].

As we mentioned on the last page, nurse sharks are slow and sluggish, and they don't put a lot of effort into moving around. While some sharks must move continually to breathe (a process known as ram-jet ventilation), nurse sharks have respiratory systems that can pump water over their gill slits. This allows them to breathe without moving.